Adiantum is a common fern. It is found in the plains of the Punjab. It grows in shady places. It is found on moist walls or rocky places. The common specie of this genus is Adiantum Capillus-Veneris.

The vegetative plant body is a sporophyte. It is differentiated into stem, leaves and roots. 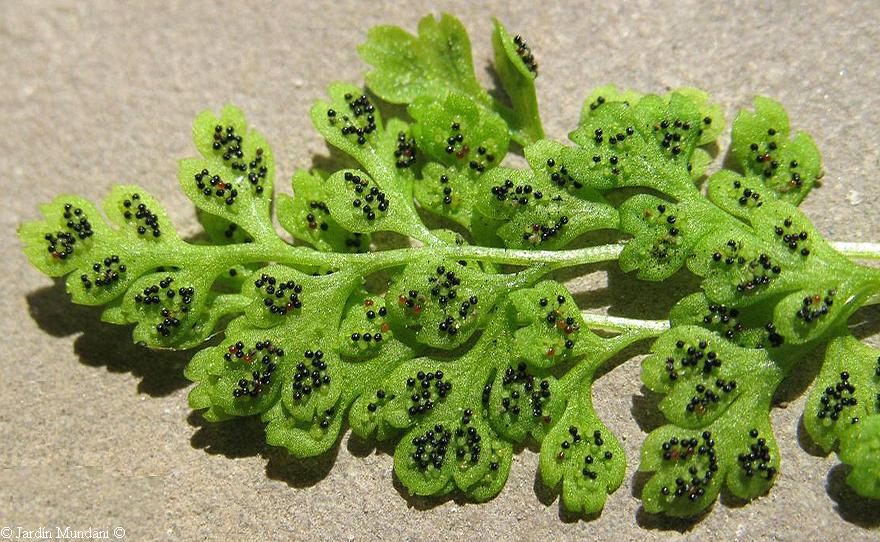 2.  Leaves: Adiantum has large bipinnately compound leaves. The main axis of the leaf is called the radius. The leaflets of the first order are called pinnae and leaflets of the second order are called as pinnules. Each leaflet is green and triangular. It has broader end towards the apex. The broader end is divided into three or four small lobes. These lobes are reflexed back. These reflexed apical lobes bear the sporangia on their underside. The young leaves are coiled inward in the embryonic state. It is called eireinnate vernation.

1.  Epidermis: The rhizome is covered by a single layered epidermis. It is without any stomata.

3.  The stele in the rhizome is dictyostetic. It has four or five meristele or bundles. They are arranged in a ring. The central part of the stele or pith. Each meristele is surrounded by its own endodermis. The stele becomes solenostelic due to presence of a single leaf gap at a particular level.

Metaxylem is present in form of plate in the centre of each meristele. It has one, two or three protoxylem groups on the side or on the ends. The xylem is surrounded by a narrow layer of phloem. Sometime a single layer of parenchymatous cells is present between the xylem and the phloem.

Both the surfaces of leaf are covered by epidermis. Stomata are present in the lower epidermis. The epidermal cells have chloroplast. An undifferentiated layer of mesephyll cells is present between both epidermises. The rachis is composed of a single layered, cortex, endodermis and stele.

The root is composed of epidermis, cortex and the stele. In the older roots the inner most cells of the cortex become sclerenchymatous.

The sporangia are borne on the under side of the reflected lobes of the oinnae. The reflexed lobe of the leaf forms a covering or false indusium over son. The groups of sporangia are called soil (sing sonis).

Each sporangium has a stalk. The sporangia are subglobose or ovate in outline. The wall of each sporangium is formed of a single layer of cells. A vertical row of cells along the narrow side form annulus. Annulus has thick walled cells. The cells on the opposite side of the annulus have thin walls. These cells fonn stomium. Each sporangium produces about 48 – 64 spores. The mature sporangia become thy. The outer thin walls of the annulus cells contracts. It exerts a force on the stomium cells. The wall of the sporangium ruptures at this point and release spores.

1.  Each sporangium develops from a single superficial cell. This cell enlarges to form an outgrowth. This cell cuts off a small cell at the base. It itself becomes the sporangial initial.

3.  The stalk cell divides to form two cell thick stalk. The sporangial cell divides and cut off three cells at the periphery. It itself becomes tetrahedral central cell.

7.  The mature spores are brownish in colour. Each spore has a three layered wall. The outermost layer is perenium or epispore. The inner most is endosporium or intine. The middle layer is thicker and it called exine or exosporium. 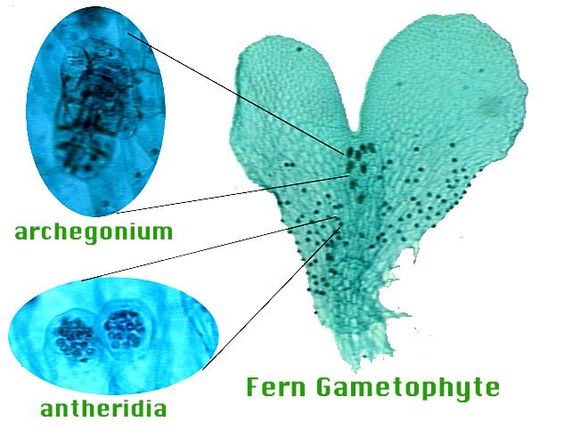 Development of prothellus: The spore falls on a suitable place. It swells very much thus the two outer walls burst at the pointed end. The intine grows out forming a short tube. A colourless cell is cut off at the base of this tube. This cell produces first rhizoid which grows down into the soil. The tip cell divides to produces a short filament of cells.

Prothellus becomes several celled thick in the middle. But it remains single layered at the margins. Several cells on the ventral side of the prothallus produce rhizoids. Fthizoids absorb water and fix the protballus. All the cells of the prothallus are green. Each cell contains a single disc shaped chloroplast. The prothallus of Adiantum is completely independent. It can manufacture its own food.

Each antheridium is a rounded structure. It projects above the surface of the prothallus. The wall of the antheridium ik formed of three cells. The basal cell is funnel-shaped. If forms the lower half of the wall. The upper cell is ring like. It forms the upper half of the wall. The apical cell forms lid. Each mature antheridium contains about 30-50 androcytes or antherozoid mother cells. The mucilaginous walls of the androcytes swell. It pushes the lid cell upward. Thus androcytes come out of antheridium. The nucleus of androcyte changes into antherozoid. Antherozoids have spiral band and numerous flagella. The antherozoids come out of the mother cell walls.

The antheridia and archegonia of the same thallus mature at different times. So cross fertilization takes place. The antherozoids are chemotactically attracted towards archegonia. Several antherozoids enter the archegonium but only one of them fuses with the oosphere to form oospore.

3.  The primary root grows for sometime under the prothallus. It then enters the soil and absorbs nutrients. The cotyledonary leaves are simple. Stem apex produce more leaves. Stem apex grows horizontally in the soil forming the rhizome. Prothallus ultimately disappears.

Alternation of Generation Of PTEROPSIDA

Adiantum shows a regular alternation of sporophytic and gametophytic generations. Both generations are independent. Sporophyte produces the haploid spores by meiosis. The spores germinate to form haploid prothallus or gametophyte. Prothellus is moroecious. It produces antheridia and archegonia. The union of antherozoid and oosphere produces diploid oospore. Oospore germinates to form diploid sporophyte.