Marsilea is an aquatic or semi aquatic plant. It is common in the temperate regions. It groNA in fresh water ponds and ditches in Punjab. Marsilea quadrifolia and Munilea minuta are commonly found in Pakistan.

The vegetative plant is a sporophyte. It is differentiated into roots, rhizome and leaves.

1.  Rhizome: The stem is in the form of a rhizome. Rhizome has unlimited growth. Therefore, it covers a very large area. The rhzome is dichotomously branched. It has nodes and internodes. A number of adventitious roots arise at each node on the ventral side. But a single leaf arises at each node from the dorsal side.

2.  Leaves: The leaves are compound. Each leaf has a long petiole and four :carats. The kallets are arranged in cross-like manner at the tip of the petiole. Each leaflet is triangular. Veins form reticulate arrangement Stomata arc located on the dorsal side and ventral side of the leaflets.

Internally the rhizome is composed of epidermis, cortex and central stele.

3. The stele in Marsilea is of amphiphloic solenostele. It has pith in the centre. Protoxylem groups are exarch in position. 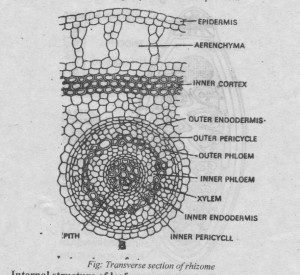 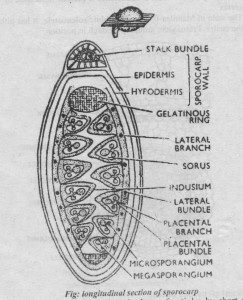 The sporocarps are attached to the base of petioles by short stalks (peduncles). Sporocarp is bean shaped. It has hard and stony wall (capsule). Its wall has single vascular bundle. The sporocarp has two inner chambers. Each chamber has a row of sori. The sori of two rows alternate with each other. The wall of each sorus is formed by its own indusium. Each sorus contains a row of megasporangia and several microsporangia.

It is believed that the sporocarp is a single folded pinna. This pinna has single vascular bundle. Receptacles or placentas are produced on the ventral side of this pinna. These receptacles bear sporangial initials. Each receptacle with the developing sporangia forms a

An outgrowth is produced towards the midrib side of pinna. This outgrowth forms a covering over the sorus. This covering is known as the indusium. 1 he pima becomes folded towards the ventral side due to the growth of the tissue in the mid dorsal region. The two sides of the pinna meet at the margin. It completely encloses the developing son. The hardening of cells in the wall gives rise to the bean shaped sporocarp. Dehiscence of sporocarp: The mature sporocarps open after two or three years. The stony wall decay and open the sporocarp. The inner gelatinous material absorbs water and swells. It splits the sporocarp into two valves. The gelatinous cord or sporophore absorbs water and swells. It comes out of the sporocarp like a worm. it carries with it the attached son. The sporophore becomes straight. The sporangial walls and indusia gelatinize and release spores. The spores remain viable for a very long period.

1.  The sporangial initial cuts off a jacket initial to the outside. It itself becomes the archesporial initial.

2.  The jacket initial divides to produce single layered wall of the sporangium. The archesporial initial cuts off two tapetal cells. These tapetal cells divide to produce two layered tapetum. Tapetum is present inner to the wall.

3.  The archesporial initial then divides producing 12-16 spore mother cells. Each spore mother cell undergoes meiosis and produces four spores. The development of megasporangia and microsporangia is similar upto the stage. Both sporangia contain 32 or 64 young spores enclosed in a single layered wall.

4.  The tapetal cells provide nourishment to young spore. So they disintegrate during the development of spores.

5.  In the megasporangium only one spore develops further. All others disintegiate forming a mucilaginous mass or plasmodium. This mass provides nourishment to the developing megaspore. In the microsporangium all the spores develop into 32-64 microspores. 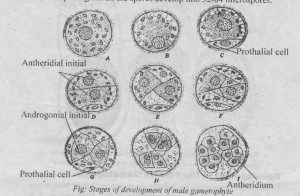 The microspore germinates to produce a small male gametophyte. It completes its whole development within the wall of the microspore.

1.  The microspore divides in to two cells. The smaller cell becomes prothalial cell. It is reduced male gametophyte. The larger cell divides in two antheridial initials.

3.  The antherozoids have many coils and single flagella. The prothalial cell and the jacket cells of both the antheridia disintegrate. Thus the antherozoids become free in the Surrounding water

Development of the Female Gametophyte

Each mature megaspore has a dome shaped projection or beak at one end. The nucleus of the megaspore lies, in this beak region. It is surrounded by dense granular cytoplasm.

1.   Megaspore divides in to two cells. A smaller cell occupies the whole beak. The larger cell does not divide further.

3.  This archegonial initial divides to produce a small primary cover cell at the top and a central cell at the base.

6.  The ventral canal cell and the neck canal cells of mature archegonium disintegrate. It forms an opening for the entry of antherozoids.

The oospore divides to produces four cells. Two sister cells develop stem and cotyledons. The other two cells develop into foot and root. The vegetative cells of the gametophyte form a calyptra. It is two to three cells in thickness. This calyptra forms envelop around the developing embryo. The surface cells of the calyptra produce long rhizoids. Cotyledon and the root grow faster than calyptra and conic out of it. The root enters the soil. Cotyledon expands to form the first simple leaf. Primary root is replaced by adventitious roots. 1 he stem grows horizontally on the soil and form the rhizome.