Puccinia is large genus. It has several obligatory parasitic species.tritici is a parasite of wheat. It completes its life cycle in two different hosts: wheat and barely. Thus it is hetcrocious rust. It infects the stem of wheat and causes black or stem rust. 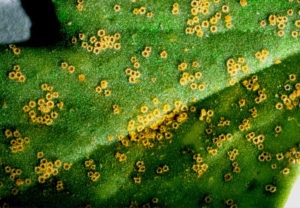 The life cycle of Puccina is divided into five stages on the basis of nature of spores. These stages are:

Its ;nfection appears in March. Reddish brown pustules or soni appear on the stem of wheat. These son are called uredosori. Uredosori contains numerous uredospores. These are globose and thick walled spores. These spores borne on long stalks. Each uredospore has two nuclei. It has one germ pore in its wall. The uredospore detached. 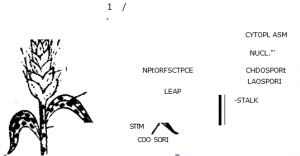 Wir.1 carries them to other healthy plants. Uredospores germinate on new wheat plants. They develop one or more germ tubes. The germ tubc reaches at the tip of stomata of host leaf. The tip of germ tube swells form vesicle called appressorium. The cytoplasm and nuclei of tie germ tube migrates into appressorium. A septa cut off the appressorium from hollow– germ tube. Appressorium forms fine tube. This tube forms a vesicle in the stomatal chamber of leaf of host. This vesicle produces branched septate hyphae in all direction inside the ‘eaf. Each cell of hyphae has two nuclei. These hyphae develop haustoria for absorbing nutrients from the host tissues. These hyphae produces new crop of dikaryotic uredospores under the epidermis of leaf. The epidermis ruptures and form pustules. Wind transfers these uredospores to other plants. Similarly several crops of uredospores are produced. Thus infection is spread to several plants. 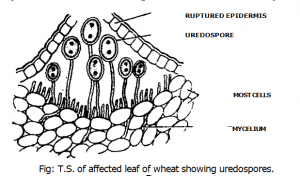 Teleutospores are produced at the end of growing season (April, Ma)). Some of the hyphae develop teleutosori. These son i produce teleutospores. The colour of teleutospores is dark red or rusty. These spores are oval in shape with tapering ends. Each spore has a constriction in middle. Each teleutospore contains two nuclei and one germ pore. They are dispersed by wind. Teleutospores do not grow immediately. The wheat crop is harvested. They fall on soil. The/ remain dormant there. They pass hot and winter season 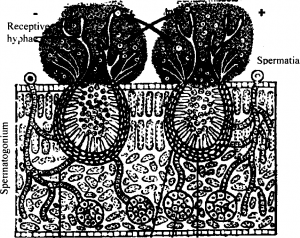 Teleutospores germinates in the next spring on the soil. Each tele’ tospore produces a germ tube called promycelium or epibasidium. The tWo nuclei of each cells fuse to form P diploid nuchus. These diploid nuclei undergo meiosis and form four haploid nuclei. The cytoplasm and four nuclei migrate into the epibisidium. Transverse septa divide the epibasidium into four cells. Each cell contains a single nucleus. Each cell produces sterigmata. Basidiospores are formed on each sterigma. The basidiospores are

Haploid basidiospores infect second host barberry (Berberis vulgaris). They fall on the leaf of barberry. They germinate to proc uce a small germ tube. The germ tube penetrates the cuticle and ente-s the epidermal cells of leaf. The germ tube produces 1-6 cells. These cells produce monokaryotic hyphae in all the directions. These hyphae spread in the mesophyll cells of leaf. These hyphae develop • hauf.toria for absorption of nutrients. The monokaryotic hyphae form knots below the upper epidermis of leaf. The knot like mass of ‘ hypliae is changed into flask shaped pycnidia or spermatangia. Spermatangium opens outside by ostiole. Spermatangia form two structures:, 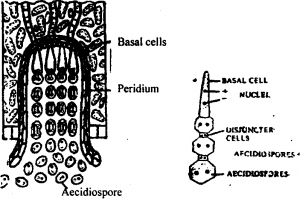 . Aecial stage: Spermatium attach on the receptive hypha of opposite sexual strain. Its nucleus enters into receptive hypha. This nucleus divides several times. The daughter nuclei migrate into hyphae through receptive tube. It makes whole of the hyphae dikarym ic.

The dikaryotic cells form group of cells below the lower epidermis of leaf These cells divide to form chain of cells. Each cell of the chali divides to form a larger and a smaller cell. The larger cell forn,s binucleate aeciospores. The small cell forms disjuncture car. The disjuncture cell disintegrates and separates the aeciospore. Some cells from the base div ide. They form wall or peridium around. the mass of aeciospores. The aeciospores become mature. The peridium ruptures and cup like structure aecidium is formed. Aec:ospores are dispersed by wind.

Atttck on wheat: Aeciospores infect the wheat plant. They fall on the zurface of wheat plant. They germinate to produce germ tube. It ente –S into leaf though stomata. It forms appressorium.Appressorium produces uredospores and completes the life cycle.