Quantitative characters of plant community – A collection of organisms interacting directly or indirectly is a community. Within the community some species carry out similar functions or exploit the same resources. These groups are called guilds. For example, birds feeding mostly on insects make up an insect-feeding guild. A community may be autotrophic when it includes photosynthetic plants and gains its energy from sun; or heterotrophic which depends upon the organic material from other organisms. 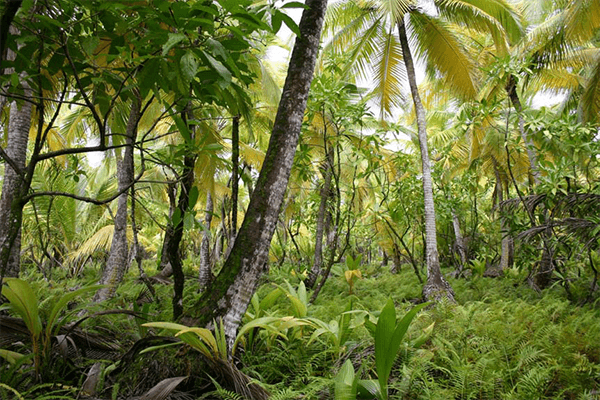 Quantitative Characters: The characters that can be expressed in quantitative terms, i.e., can be measured. These include characters such as frequency, density, abundance, cover and basal area.

Qualitative Characters: The characters which can be expressed in qualitative way only, i.e., can be described only and not measured. These include physiognomy, phenology, stratification, abundance, sociability, vitality and vigour, and life or growth forms. Quantitative characters of plant community

The synthetic characters are those aspects of community which are based on analytical characteristics and utilize data obtained in the analysis of a number of stands. These describe the makeup of a community and include presence, constancy and fidelity.

Biological and Physical Structure of Community

Ecologists classify communities in different ways, however all communities have certain characteristics that define their biological and physical structure.

Biological structure of a community refers to number and relative abundance of species. A community can be composed of a few common species: or it can have a wide variety of species. When a single or few species predominate within a community, these organisms are called dominants.

Relative Abundance: Relative abundance can be discovered by counting all the individuals of each species in a number of sample plots and determining their percentage. For example, a sample taken from a forest community contains 24 species of trees having a diameter of more than 10 cm. Out of these two species, let us suppose A and B, make up almost 44 percent of the total stand density. These species are designated as most abundant. The next four species, C, D, E and F make up about 5 percent of stand. These would be classified as next most abundant species.

Species Diversity: Species diversity refers to both the number of species and relative abundance of individuals among the species. A community that contains a few individuals of many species is said to have higher divers.

Differences in terrestrial communities are defined by the form and structure of vegetation. General appearance of vegetation is referred to as physiognomy. Vegetation may be classified according to growth form or life form.

Life Forms: A Danish botanist Christen Raunkiaer (1903) designed a more useful system. He classified the plant life by life forms. He defined these life forms in terms of height of plants perennating tissue (embryonic or meristematic tissue of buds, bulbs, tubers, roots and seeds that remain inactive over the winter) above ground. Raunkiaer classified all species within a community into six principal life form classes. These are:

Phanerophytes (Gr. phaneros = visible): The plants in which perennial buds are carried well up in the air and are exposed to climatic conditions (present on stem). Trees and shrubs over 25 cm found in moist and warm environment are included in this class. Quantitative characters of plant community
Chamaeophytes (Gr. chamia = on the ground): The plants species in which the perennial shoots or buds are present on the surface of the ground or 25 cm above the surface are classified in this class. The buds receive organic food from fallen leaves. These include plants growing in cool and dry climates.

Hemicryptophytes (Cr. Hemi = half + kryptos = hidden): This class includes plants whose perennials buds are present at the surface of the ground where they are protected by soil and leaves. Many such plants have rosette leaves and are found in cold, moist climates.

Cryptophytes (Gr. kryptos = hidden): The class consists of species with their perennial buds buried in the ground on a bulb or rhizome, where they are protected from freezing and drying. Such life forms are found in cold, moist climates.

Therophytes (Gr. theros = summer): The annuals, which complete their life cycle from seed to seed in one growing season, are included in this class. The plants survive unfavourable periods as seeds. These life forms are characteristics of desert and grasslands. Quantitative characters of plant community

Epiphytes (Gr. upon): The plants growing on other plants with roots up in the air are included in this class.

Such a system of classification provides a standard means of describing the structure of a community for the purpose of comparison.

In a Terrestrial ecosystem, for example a well-developed forest ecosystem, there are several layers of vegetation. From top to bottom, they are: 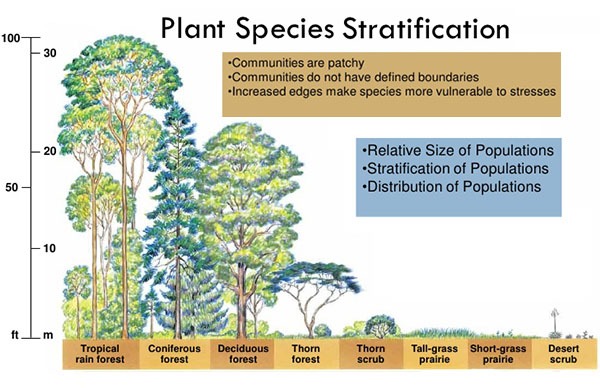 Canopy (Autotrophic Layer): It is the primary site of photosynthesis and has major influence on forest. If it is open, considerable sunlight and water will reach the lower layers, and if it is dense the understory and shrub layers are poorly developed for want of light and water.

Understory: It consists of young trees and tall shrubs and their survival is subject to the density of canopy. Only shade tolerant species grow better in this layer. Understory species may replace the canopy trees after their death.

Shrub Layer: It is the layer, formed of shrubs and small, trees and is usually poorly developed.

Herb or Ground Layer: The nature of herb layer depends upon moisture, slope position, the density of the canopy. The species composition vary from place to throughout the forest.

Forest Floor: It is the site where important process of decomposition takes place and decaying organic matter releases nutrients for reuse of forest plants. Quantitative characters of plant community 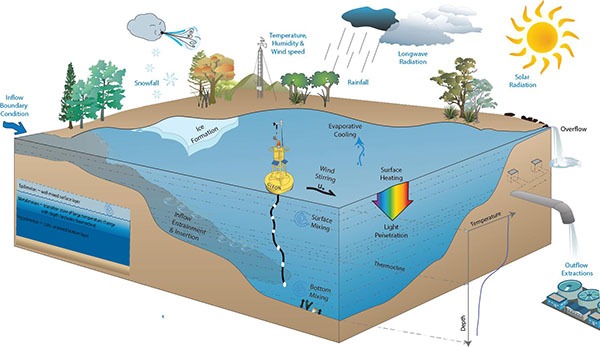 In lakes and larger ponds three distinct profiles can be recognized on the basis of temperature and oxygen during midsummer. These are:

Epilimnion: It is layer of freely circulating water.

Metalimnion: it is layer of water characterized by a steep and rapid decline in temperature.

Hypolitnnion: It is deep, cold layer of dense water about 4°C, often low in oxygen and a layer of-bottom mud.

Most lakes and ponds are surrounded by littoral zone or shallow water zone, in which light reaches the bottom, stimulating the growth of rooted plants. Beyond the littoral zone there is open water, the limnetic zone, which extends to the depth of light penetration. It is inhabited by plant and animal plankton and free-swimming organisms (nekton). Beyond the depth of effective penetration is the profundal zone that depends on a rain of organic material from the limnetic zone. Common to both the littoral zone and profundal zone is the third vertical stratum, the benthic zone or bottom region, which is the place of decomposition. Quantitative characters of plant community

The horizontal zonation is characterized by presence of submerged, floating and emergent vegetation. These zones develop in response to water depth.

Communities also possess a heterotrophic layer comprising of animals. The degree of vertical layering has a pronounced influence on the diversity of animal life in the community. A strong relationship exists between degree of vertical layering and bird’s species diversity. Increased vertical structure means more resources and living space and a greater diversity of habitats. For example, grasslands with few strata support only six or seven, whereas a forest supports many bird species.

Vegetation exhibits large patches across the landscape. These large patches, spatially separated from one another, produce a horizontal pattern. It increases the physical and ecological complexity of the environment. Quantitative characters of plant community

Horizontal patches reflect physical changes in the environment such as soils, disturbance, light, moisture, and nutrients. Horizontal patchiness of plant life influences the distribution and diversity of animal life.

The dispersion of populations within a given area is characteristic for a community. The dispersion patterns of the populations reflect the interactions among individuals within the community, both intraspecific and interspecific.