Regulation of Gene Expression In Eukaryotes

The expression of gene can be controlled at different levels in the eukaryotes. Following are steps involved in Gene Expression in Eukaryotes. The first step is transcriptional control of gene expression. 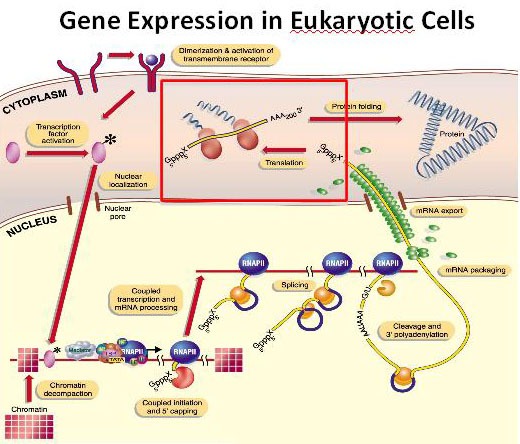 Gene expression may be blocked or stimulated at any post-transcriptional step. Gene expression can be controlled during RNA Processing and export of mRNA. The cell must process its initial transcripts before they can act as mRNA, tRNA, or rRNA. An mRNA transcript must receive a 5′ cap and a poly-A tail. Similarly, the introns of the RNA segments must he removed and the exons (coding segments) spliced together. Then this RNA passes from the nucleus to the cytoplasm through a nuclear pore. In the cytoplasm, the mRNA interacts with a number of specific proteins and may associate with ribosomes to undergo translation. Each step in RNA processing provides an opportunity for control of expression.

Regulation of mRNA Degradation: The life span of mRNA molecule in the cytoplasm is also an important factor in controlling the pattern of protein synthesis in a cell. The mRNA molecules of eukaryotes can have lifetimes of hours, or even weeks. The mRNAs for hemoglobin are translated repeatedly in the developing blood cells of most vertebrate species. The egg cell can store a large number of mRNA.

Translation in eukaryotic cells involves many protein factors like initiation factors. Thus, there are opportunities for the control of gene expression at the level of translation.

The last opportunities for controlling gene expression occur after translation. Often, eukaryotic polypeptides must he cut up to yield the active final protein. The posttranslational processing of the hormone insulin is an example of this control. 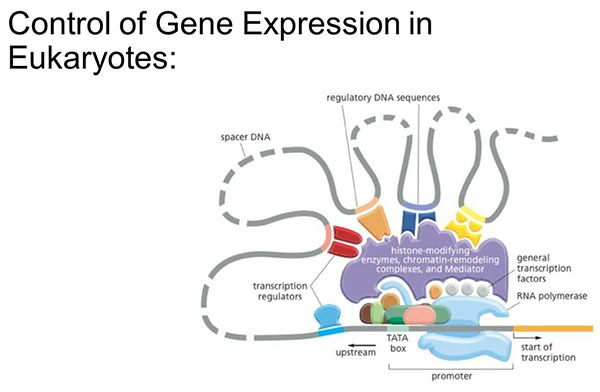 Role of hormones in Control of Gene Expression

(a) Action of hormones in invertebrates: Giant (polytene) chromosomes are present in the salivary glands in certain insect larvae. The presence of these chromosomes provides an evidence for the control of gene expression at the transcriptional level.

The chromosome puffs appear at specific sites of the polytene chromosomes. It makes the, DNA in that region more accessible to RNA polymerase. The formation of puff is controlled by a hormone ecdysone. It causes molting in insects.

(b) Action of steroid hormones in vertebrates: Sex hormones and other steroids alter gene expression in target cells of vertebrates. Steroids are soluble in lipids. When a cell is exposed to a steroid, the hormone diffuses across the plasma membrane. It crosses the cytoplasm. It then enters the nucleus, where it combines with a soluble receptor protein. In the absence of the steroid, the receptor protein is associated with an inhibitory protein. Binding of the steroid hormone to the receptor causes the release of the inhibitory protein. Therefore, the activated receptor protein can now attach on the specific site of the DNA. These sites are within enhancer regions that control steroid-responsive genes. Thus, steroid acts as a chemical signal to switch on specific genes in certain cells.

2017-09-06
admin
Previous: Regulation of Gene Expression In Prokaryotes By Lac Operon Model
Next: Biodiversity Measurement in Relation to Diversity of Ecological Function