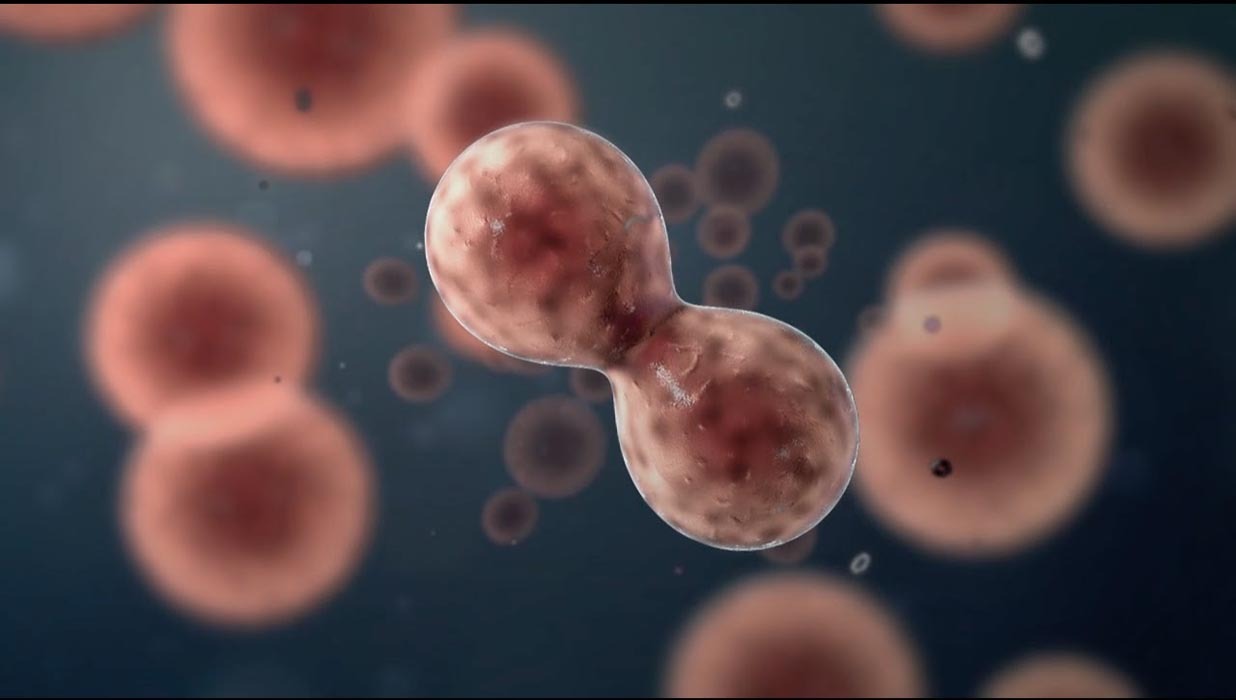 The usual methods of asexual reproduction are binary fission and endospore formation.

It is the most common way of asexual reproduction in bacteria. It takes plane when the conditions become suitable for growth. A cell grows twice to its size and then divides into two identical daughter cells. Each daughter cell grows to the size of the parent cell. The process is sometimes referred to as life cycle.

Before fission, the bacterial cell takes up nutrients from its environment, synthesize cell substances such as RNA, DNA, proteins, enzymes and other macro-molecules. The cell mass and cell size increase and new cell wall material is synthesized. The DNA replicates and cytoplasmic membrane grows inward at the middle of the cell. The DNA is attached to mesosome which holds it in position during replication. The inward growth of cell well results in formation of a septum that separates the daughter cells. 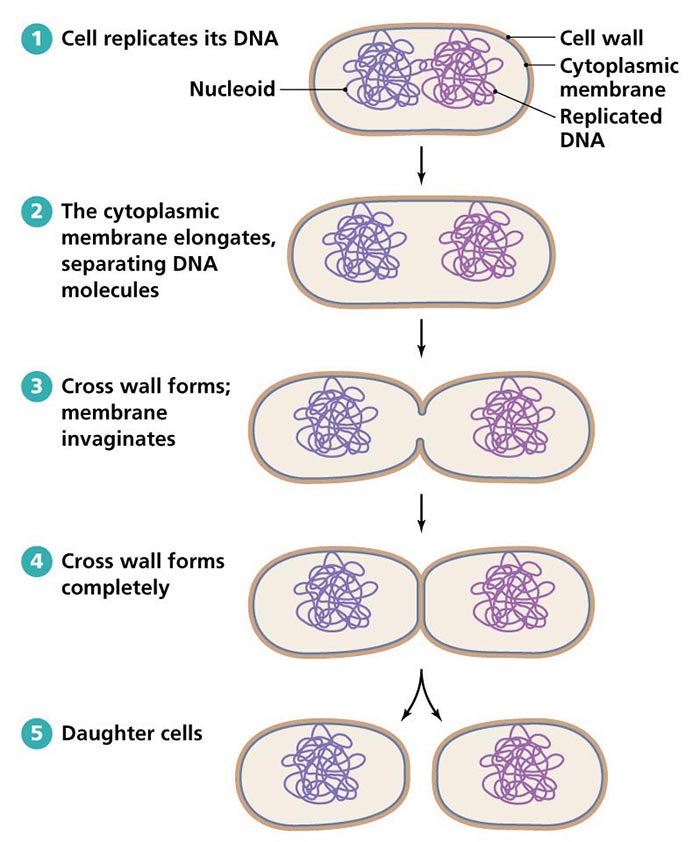 Endospores are spherical, oval (Clostridium), ellipsoidal (Bacillus) or cylindrical mass of protoplast surrounded by a multi-layered wall. They may develop in terminal, sub-terminal or central region of the cell. The outermost wall layer is delicate and called exosporium. Beneath it there is spore coat composed of several layers of proteins. The spore coat is followed by a thick cortex formed of a specific peptidoglycan. The protoplast contains a complex of calcium and dipicolinic acid (DPA) which provides heat resistence. 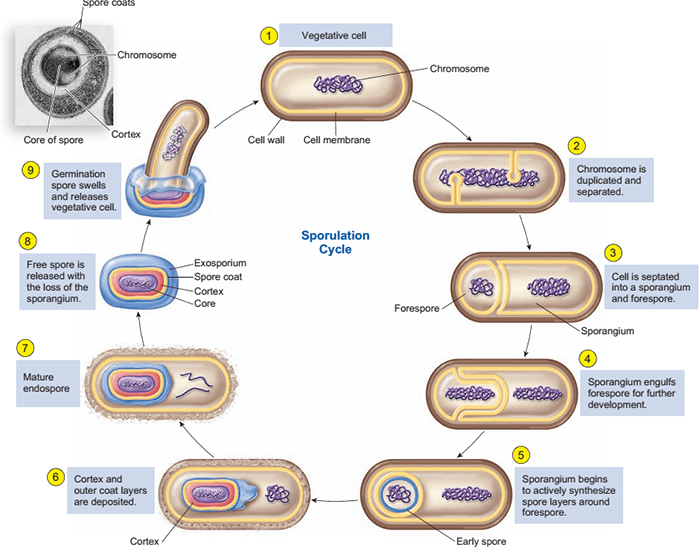 Transformation Transfer of cell-free DNA from one cell to another.

Conjugation Transfer of genes between cells that are in physical contact with one another.

Transduction Transfer of genes from one cell to another by a bacteriophage.

The first evidence of genetic recombination or exchange of hereditary material in bacteria was noted by Griffith in 1928 during his transforming experiment.

Griffith while working with Streptococcus pneumoniae, a bacterium that causes pneumonia fever found that there were two strands of bacterium. One was capsulated cause disease and form smooth colonies when grown on agar. It was called S-Type. The other was non-capsulated, do not cause disease and form rough colonies when grown on nutrient agar. It was named R-type. Griffith injected a mouse with living R-cells and heat killed S-cells. The mouse died within few days after injection. Griffith isolated living S-cells from the blood of the dead mouse. Griffith concluded that heat killed S-cells released a factor which enable the R-cells to develop capsules and become virulent. The transformation was found to be heritable, Griffith termed it as transforming principle. 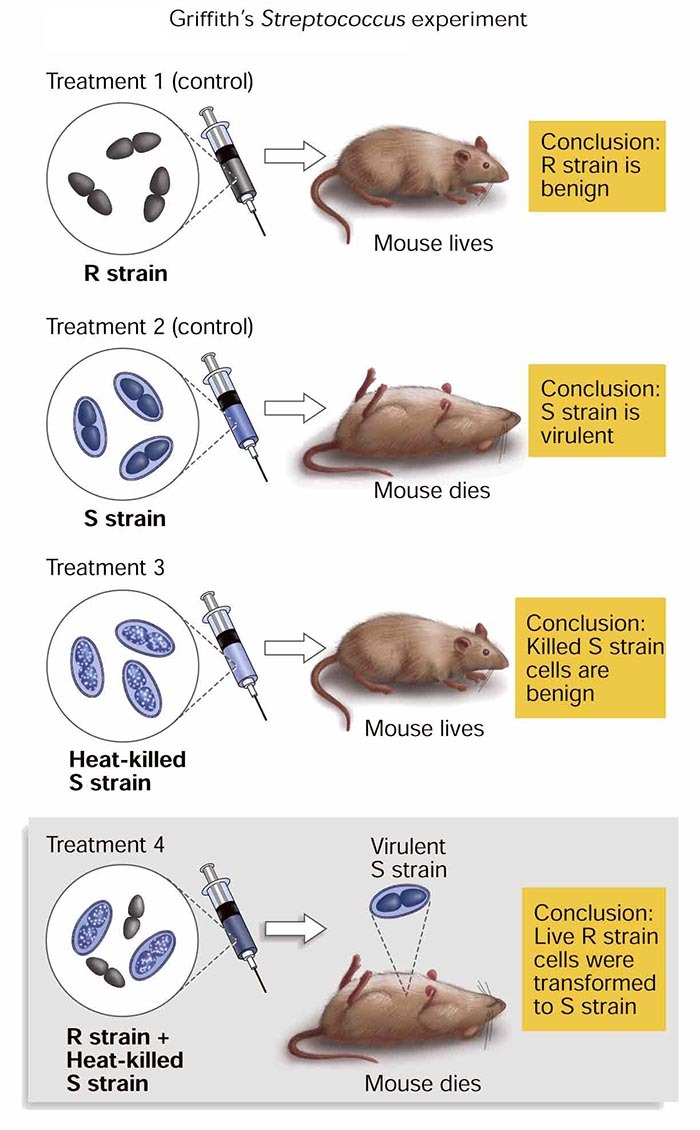 Avery. Macleod and<McCarty in 1944 isolated and identified the transforming principle to be DNA. They defined it as genetic material of bacteria and transforming agent. It is now known that during transformation a short Piece of DNA is released by the donor and actively taken up by the recipient, where it replaces a similar piece of DNA. Since 1940, transformation has also been demonstrated in Bacillus and Azotobacter Species. 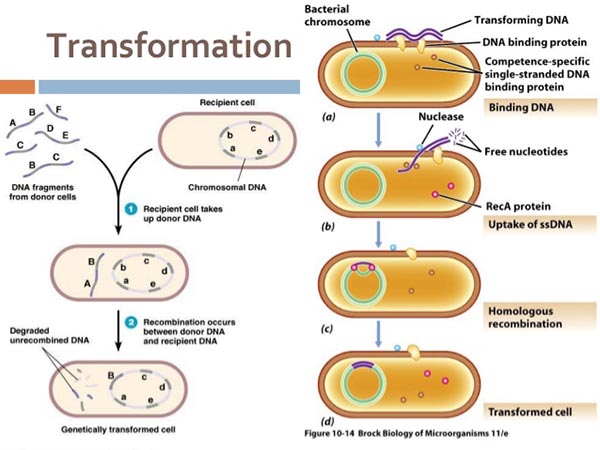 Conjugation involves transfer of DNA between cells in direct contact through conjugation tube.

The process was first demonstrated experimentally by Joshua Lederberg and Edward Tatum in 1946, in Escherichia coli. They observed that normally E. coli can synthesize all the amino acids required by it, if given a supply of glucose and mineral salts. Lederberg and Tatum induced mutations by exposing the bacteria to radiations. They obtained two mutants, one mutant was unable to synthesize biotin (a vitamin) and amino acid methionine and the other could not synthesize amino acids threonine and leucine. Both the mutants were mixed and cultured on a medium lacking all the four factors. Theoretically none of the cells should have grown, but a few hundred colonies developed, each from one original bacterium. This suggests exchange of genetic information. The transformation was ruled out as no chemical was isolated. Later electron microscope revealed that direct cell contact or conjugation takes place in E. coll. 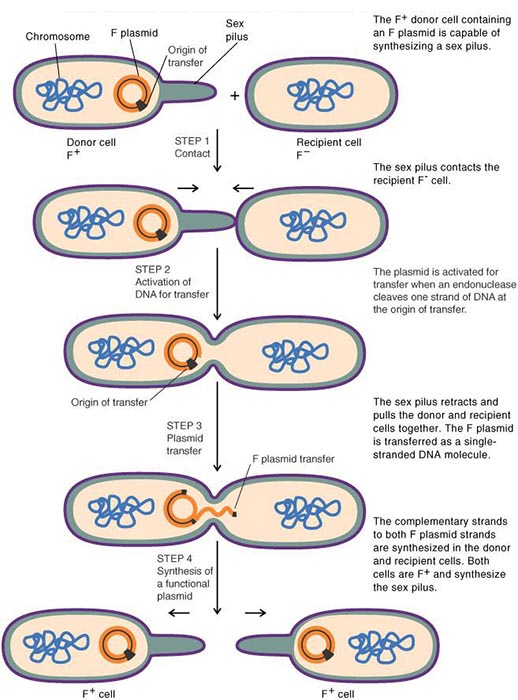 A clearer understanding of conjugation in bacteria came about through the experiments by Francois Jacob and Elie L. Wollman suggesting that different mating types exist in E. coli. Some bacteria contain an extrachromosomal piece of DNA called sex factor or F-factor (fertility factor). These cells were named male or F+ and these are donor cells. The cells without F factor were called female or F- and they are recipient cells. E. coli are coated with hair-like pilli, but the F+ contains one to three additional pilli, the F pilli or sex pilli which are responsible for physical contact between the cells. Later new strains of F+ cells were discovered which undergo sexual reproduction with F- cells are greater rate. These strains are called high frequency recombination strains or Hfr strains. This discovery, helped in better understanding of conjugation.

During conjugation, the F+ and F- cells establish physical contact and a tube called conjugation tube is formed between them. The F factor unwinds and replicates. A single-stranded F factor crosses to the recipient cell through the sex pilus. DNA replication occurs in both donor and recipient cell so that double-stranded nature of the DNA is re-established in both cells.

Transduction is the transmission of a double-stranded piece of DNA from a donor cell to a recipient cell through a third party usually a bacteriophage.

The phenomenon was discovered by Zinder and Lederberg in 1952 when they were searching for sexual conjugation in Salmonella typhimurium, a bacterium that causes typhoid in mouse. They mixed mutants unable to synthesize certain nutrients and cultured on medium lacking these factors. They isolated recombinants able to synthesize all the nutrients. This suggests exchange of genetic material through conjugation.

Later, they carried U-tube experiment. They placed mutants in each arm of the tube and separated them by a fine glass filter to pass through it. However, the recombinants were found even then. This rule out conjugation. Zinder and Lederberg suggested that some filterable agents are responsible for exchange of genetic material. It was also observed that this agent is not destroyed by Dnase (deoxyribonuclease). This suggests absence of transformation. It that this filterable agent is a phage virus or bacteriophage also observed in E. coli. 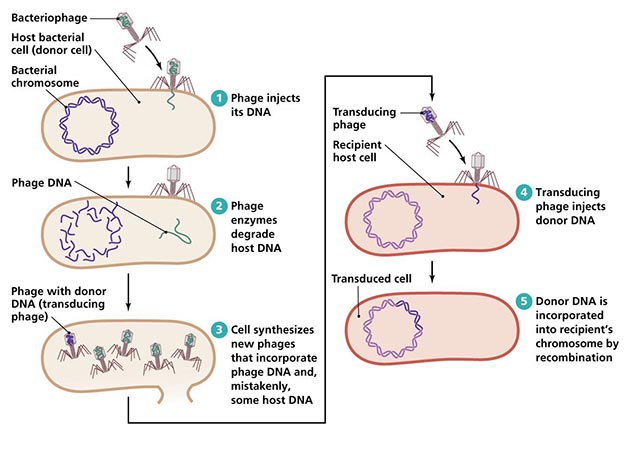 During infection, the bacteriophage or phage virus attaches itself to the surface of the bacterial cell bacterial cell and injects its DNA into the cell. The viral directs the synthesis of viral proteins and new phage particles are assembled in the cell. The cell wall of bacterial cell bursts and the phages are released. This is called Lytic cycle. However, some viruses incorporate their DNA into bacterial chromosome after infection. These are called temperate viruses and the recombinant DNA is known as prophage. Such bacteria are called lysogenic bacteria. The viral DNA replicates along with bacterial chromosome normally, however under certain conditions it destroys the bacterial cell and the prophages are released. When these prophages infect other bacteria, they transfer donor bacterial DNA to recipient bacterial DNA. Thus, phage virus serves as a vector between donor and recipient bacteria.

If all fragments of bacterial DNA have a chance to enter a transducing phage, the process is called generalized transduction. 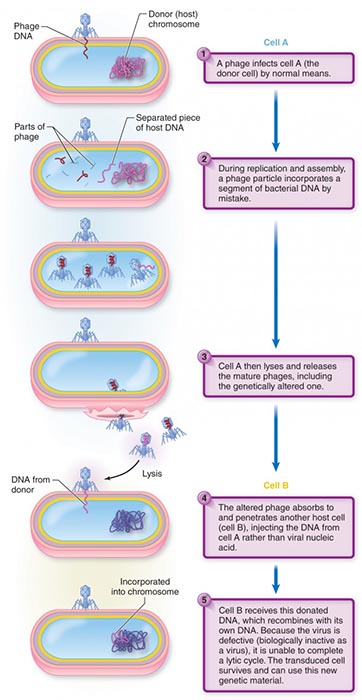 In this type of transduction, the temperate phages can transfer only a few restricted genes of bacterial chromosome that are adjacent to the prophage in e bacterial chromosome. Therefore, the process is also called restricted transduction. It occurs when a bacteriophage genome, after becoming integrated as prophage in the DNA of the host bacterium, again becomes free upon induction and takes with it into the phage head a small adjacent piece of the bacterial chromosome. When such a phage infects a cell, it carries with it the group of bacterial genes that has become part of it. Such genes can recombine with the homologous DNA of the infected cell. The specialized transduction is studied best in phage lambda of E. coli. 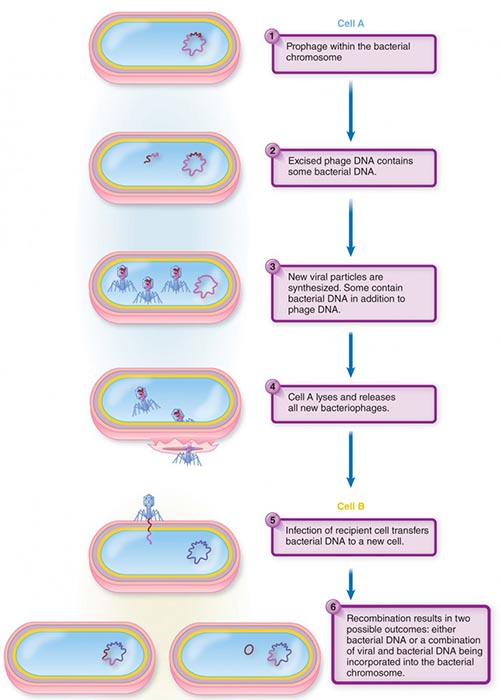