Seed dispersal and fruit dispersal both of them refers to the carrying of these particular structures to places away from the plants producing them to other wider regions. Plants have adopted this dispersal mechanism because they are fixed to the ground therefore they had to develop a mechanism for distribution of their seeds and fruits.

What Does Dispersion Mean?

Basically, In biology dispersion means the process of distribution of seeds and fruits to different wider areas for production of new plant. But, if there is no dispersal, then these structures will either fall just under the parent plants.

It happens to be a tree with huge crown or just in the vicinity of parent plants if they happen to be straight trees or shrubs or herbs.In any case, seedlings arising from the seeds will face competition for water, minerals, sunlight available in restricted area for their proper development. The result may be mass death of the seedlings. 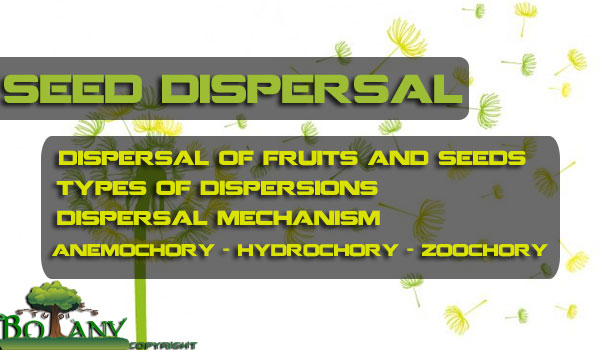 Types of Dispersion And Dispersal Mechanism

To enhance their survival value, the plants have developed certain adaptations as a result of which they reach distant places. If the places, to which they are carried, are suitable for their development, new plants get established at those places. The dispersal of fruits and seeds is brought about by the following two mechanisms:

Dispersal of Fruits and Seeds With the Aid of External Agencies

Various external agencies like wind, water, animals, etc., are involved in the dispersal of fruits and seeds. These different types of dispersion and their dispersal mechanism are described in detail as follow.

The wind dispersal takes place by the carrying of seeds and fruits away to suitable places for germination by the wind. The plant requires certain adaptations Which enable them to be dispersed easily by wind.

Production of Lighter Fruits & Seeds: Many plants produce very light fruits (grasses) or seeds (orchids), so that they may be carried easily by the wind.

Dispersal of Flattened or Winged Fruits and Seeds: In some plants, fruits (Dioscorea) and seeds (Acer, Delbergia) become flattened or develop one or more appendages resembling thin, membranous wings which provide large surface to the wind so that they are carried away easily.

Production of Hairs: Many plants produce hairy seeds such as (Calotropis, Cotton) which help in their dispersal by wind. These hairs are hygroscopic and when they reach place where sufficient moisture is present in the air, the hairs collapse and the seeds settle down on the soil.

Parachute Mechanism: In many plants like, Sonchus, Dandelion, the calyx is persistanl and modified into hairy structures, the Pappus, which is present on top of the fruit. The pappus act as parachute and helps the air current to carry the fruits. The pappus in some fruits is hygroscopic and helps the fruit in settling down.

Persistent Styles: In many cases, e.g., in Clematis, feathery styles persist at the top of the fruits which helps in dispersal of fruit by wind.

Censor Mechanism: In some pants, the mature seeds remain closed in fruits and are dispersed only when the fruits are shaken by strong air currents, for example, in Poppy, Pelican flower (Aristolochia).

Tumble Mechanism: many annual weeds dry up as soon as their seeds ripen. These weeds get uprooted when strong wind below. The uprooted plants are rolled over to distant places and during the course the seeds are dispersed, e.g., in Pohli (Carthamus oxycantha).

The fruits and seeds which are dispersed by water develop certain floating devices, which provide buoyancy to them and helps in floating such as:

Development of Fibers: The Coconut fruits are fibrous and enclose air which helps them in floating.

Development of Spongy Thalamus: The fruits of Lotus possess a spongy thalamus containing air which helps them to drift to a considerable distance.

Development of Spongy Aril: In case of Nymphaea, the seeds are buoyant due to the presence of spongy aril and presence of air spaces in testa.

Development of Sticky Fruits: In many plants, the fruits are sticky in nature due to the presence of sticky glands on their walls. These fruits get stick to the body of animals or socks or clothes of human beings and are carried to different places, e.g., in Boerhaavia diffusa. 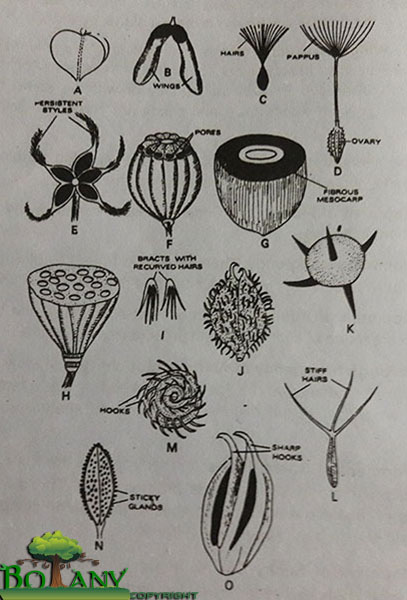 Development of Sticky Seeds: In some plants, Corida (Lasoora), Viscum, Lornthus, the fruits contain sticky seeds. When the birds feed on such fruits, the seeds stick to their beaks and cannot be shaken of easily. These birds fly to other places and in order to get rid of the sticky seeds they rub their beaks against hard surfaces. During the process the seeds are shed of at various places and are dispersed.

Development of Fruit/Seed Wall Emergences: In many plants the fruits and seed develops spines, awns, hooks or barbs which help them to cling to the fur of animals or clothes of humans and get dispersed. These fruits are also referred by another term “Fruits with hooks”

Seed Dispersal by Impermeable Testa: In many fruits, that are preferred by birds and other animals for eating, the seeds are small with impermeable testa and are produced in large numbers usually. When eaten, seeds of such fruits remain unaffected in the alimentary canal due to their impermeable testa and are excreted along with the excreta. As such animals and birds move from places to places and pass out excreta at irregular intervals a number of times in a day. In this way, the seeds are dispersed.

Dispersal of Fruits and Seeds by Animals Due to their Storing Habit: Many animals like Squirrels and Mice store hard, dry fruits and seeds for periods of scarcity. During the process, many seeds and fruits get slipped and lost on the way and are dispersed.

Fruits and Seed Dispersal Resulting from Economic Consideration (Dispersal by Humans): The fruits and seeds of plants having economic values are carried from one place to the other throughout the world by man. During the process, they are dispersed.

Fruits and Seed Dispersal by Plant Itself

Many fruits, when ripe, suddenly burst and seeds are thrown to some distance from the parent plant. Such fruits act as Explosives. This process is known as self dispersal or plant dispersal. 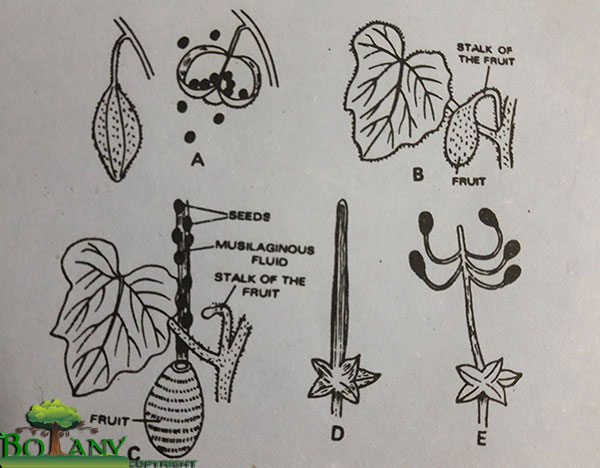 Plant Dispersal or Self Dispersal: A – Balsam capsule; B & C – Squiring cucumber; D – Regma of Geranium

Geranium Dispersal: In geranium, the mature fruit breaks into five cocci. the styles, to which the cocci are attached, curl upward suddenly throwing the seeds away from the cocci with great force.

Pea Dispersal: In Pea and other Leguminous plants, the pod suddenly bursts open, and the two valves become twisted spirally in opposite directions with the result that the seeds are scattered.