Color blindness, or color vision deficiency, in humans is the inability to differentiate between som or all colors that other people can distinguish. It is most often of szr.etie nature. But it may also occur because of eye, nerve, or brain da. ,age, or due to exposure to certain chemicals. The English chemi.,t John Dalton in 1 794 discovered colour blindness in man.

Color blindness affects a significant numbe • of people. It occurs in about 8 percent of males and only about 0.4 percent of females. In the United States, about 10 million men and about 0.4 percent of the female population is affected with this disease. It has been found that more than 95 percent of all variations in human color vision involve the red and green receptors in male eyes. It is yen, rare for males or females to become blind for the blue color.

(a)    One pigment is sensitive to short wavelengths (blue).

(b)      One pigment is sensitive to medium wavelengths (yellow green).

(c)   One pigment is sensitive to long wavelengths (red). The sensitivity of normal color vision depends on the overlap between the absorption spectra of the three systems. Different colors

are recognized when different tnpes of cone are stimulated to different extents. For example. red light stimulates the long wavelength cones much more than either of the others. But two cone systems are stimulated for hue colour. The abnormalities or malfunctions in different kinds cone systems cause colorblindness Types of Colour Blindness

Mutations in pigment genes cause two types of colour-blindness:

A dichromat can see two primal.> colours. But it cannot see the third colour. The pigments of this colour are missing due to in There are five types of mutation in it.

(i).    Protanopia: It is caused due to lack of long-wavelength

sensitive retinal cones. Therefore, such persons are unable to distinguish between colors in the green-yellow-red section of the spectrum. They have a neutral point at a wavelength of 492 M. Therefore, they cannot differentiate light of this wavelength from white. Their sensitivity to light in the orange and red part of the spectrum is also reduced.

(ii).   Deutetanopia is green blindness. It is caused due to lack of medium-wavelength cones. The affected person unable to distinguish between colors in the green-yellow-red section of the spectrum. Their neutral point is at a slightly longer wavelength. 498 nm. This is one of the rarer forms of colorblindness. It is onIn I% of the male population. It is also known as Dallonism after John Dalton.

Protanomaly: It is caused due to mutated form of the long-wavelength pigment. The peak sensitivity of this pigment is at a shorter wavelength than in the normal retina. Protanomalous individuals are less sensithe to red light than normal. –lhey are less able to discriminate colors. ‘Hwy cannot see mixed lights. Prot anomaly is a rare form of color blindness. It makes up about I% of the male population.

Tritoanomaly (blue y.:Ilow blindness): This color blindness involves the inactivation of the short-wavelength sensitive cone system (whose absorption spectrum peaks in the bluish-violet). It is called tritanopia or blue-yellow color blindness. Mutation of the short-wavelength sensitive cones is called tritanomaly. The genes for blue cones are present on chromosome number 7. Therefore. Jritoanomalv is not sex linked. It is equally distributed among males and females. 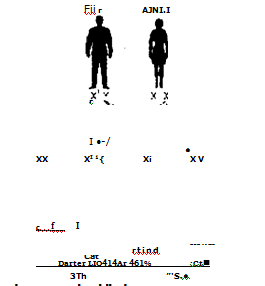 2. The gene for red-green color blindness is transmitted from a color blind male to his entire heterozygous daughter. These

daughters become carrier. The carrier woman passes on a imitated X chromosome region to only half her male offspring. The sons of an affected male will not inherit the trait.