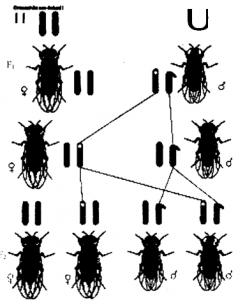 Cross 1: Morgan mated this white eyed male with a wild type red eyed female. All 1237 offspring of this cross had red eyes. Thus red eye is a dominant trait.

Cross 2: Morgan then allowed males and females of F1 generation to mate and produce F2 generation. There was following progeny in

All the white-eyed flies were only males. There was no white eye female in F2 generation.

A cross in which the sexes of the organisms are reversed as compared to original cross is called reciprocal cross. 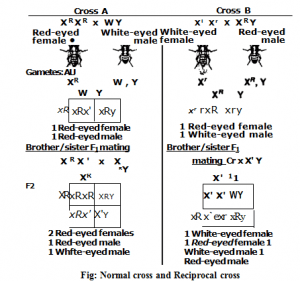 was exactly like step 3 test cross. This result is also against the Mendelian laws.

Morgan concluded that the inheritance of eye colour is related to the sex of the offspring. Morgan proposed that:

(ii).   The alleles for eye colour are present only on X

chromosome. There is no corresponding allele for. this trait on Y chromosome. Y chromosome is empty for genes. Thus even a single recessive allele on X chromosome can express itself in males. So males are hemizygous.

(iii).       Females have two X chromosomes. Both X chromosomes carry an allele of the trait. Females can be homozygous or heterozygous.