In general terms, traits determined by genes on sex chromosomes are not different from traits determined by autosomal genes. Sex-linked traits are distinguishable by their mode of transmission through successive generations of a family. In humans it is called X-linked or Y-linked inheritance.

I. X-linked recessive Traits: These are expressed in all

heterogametic and homogametic which are homozygous for the recessive allele. An example is the sex-linked recessive is horns in sheep that appear only in males. The recessive phenotypes of such genes are more common in males than in females. The examples of X-linked recessive trait in human are Color blindness, Duchenne muscular dystrophy, Hemophilia. Kennedy disease. 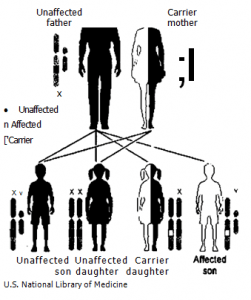 Example: $RY gene is present on Y chromosome of man. It determines maleness. Y — linked traits are found only in males. These traits directly pass through Y chromosome from father to son only. Females do not inherit Y chromosome. So such traits can not pass to them.