Methods of Control and Conservation

Erosion literally means weathering away. It refers to “removal of fertile soil surfaces from their original place and carrying away by agencies such as wind, water, ice or gravity to some other places”. 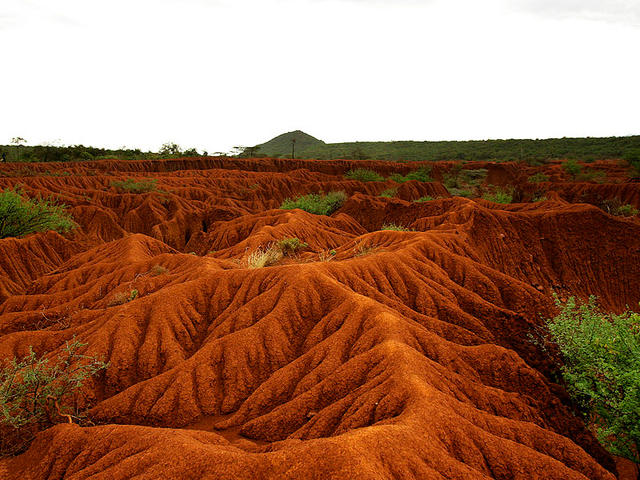 The erosion consists of detachment of soil particles from the surface and transportation. Water and wind are the major factors causing the erosion. Rain drops and runoff water are the major soil detachment and transportation agents water erosion, while the wind velocity near the ground is mainly responsible for wind erosion. Weathering of mountains results in formation of large flood plains and coastal plains. When water or wind moves across the surface of land, it picks up soil particles and carries them away in suspension.

Removal of soil from one part to another usually downhill, by the action of water is known as water erosion. It involves detachment of soil particles and their transportation. Erosion by water is also called soil washing.

When raindrops strike the ground surface, the soil particles become loose and splashed due to its impact force. These blasts bounce water back into the air carrying with it fine particles of soil, mostly silt and clay. The splashed material tends to scatter uniformly on the surface of the soil in all directions. This is called splash erosion.

Large quantities of soil are eroded by the simple process of splashing. The soil loss due to splash is 50 to 90 times greater than the runoff losses. It is estimated that more than 100 tones of soil per acre is splashed due to heavy rainfall on a bare soil.

The uniform removal of surface soil by the action rainfall and runoff water is known as sheet erosion. It occurs in soils with gentle and smooth slope. More particles are washed from a bare soil than from those protected by vegetation. Sheet is erosion is more damaging form of soil erosion by water. Continuous sheet erosion exposes sub-soil to plant growth thus reducing the productivity.

Rill Erosion: Rill erosion is the removal of soil by runoff water with the formation of shallow channels that can be smoothed out by normal cultivation. Rills develop when silt-laden water flows along slopes through small finger-like channels called rills: The soil eroded by upland areas comes from these rills and inter-rills areas between them.

Gully Erosion: As the volume of concentrated water increases and attain more velocity on slopes, it enlarges rills into gullies. The rills become so deep that the ground cannot be smoothed out by ordinary tillage tools. In loose, well drained sloping soil gully formation takes place easily whereas compacted soils check the rate of gully formation. Gullies are sometimes as deep as 6 to 12 meters.

Stream Erosion: Stream erosion is the removal of soil material from steam bed and cutting of the stream banks by the force of running water. It is often increased by the removal of vegetation, over grazing tillage near the banks and is influenced by the velocity and direction of the flow, depth and width of the stream, soil texture and alignment of the stream.

Water flowing down a sloppy land may cut a hole on an unprotected spot. Such a hole often becomes a small waterfall. As the water goes over the face of the fall it tends to undercuts its base, and the top soil fall in. The water leads to gully formation.

Landslide is the downward and outward movement of slope forming material composed of natural rocks, soil, artificial fills or combination of these materials. In hilly areas is normally caused by the hydraulic pressure exerted by soil-pore water pressure built above the rock strata during heavy rains. Slip erosion is very common on stream and river banks. Streams or rivers especially at flood stage undercut their banks, particularly on curves, forming slope and making the banks unstable. Landslides pose an immense threat to highways, villages, and agricultural lands.

The tidal waters of sea cause considerable soil erosion along the coast. The roaring waves rush and dash on coast removing bits of coastal land every time. In this way, coastal lands are washed off and turned in vast strips of Khar lands due to creeping of sea water into the low lying better shore lands.