The genus Equisetum has 25 species. It is world wide in distribution. They are most common in temperate regions. It generally grows in moist places. 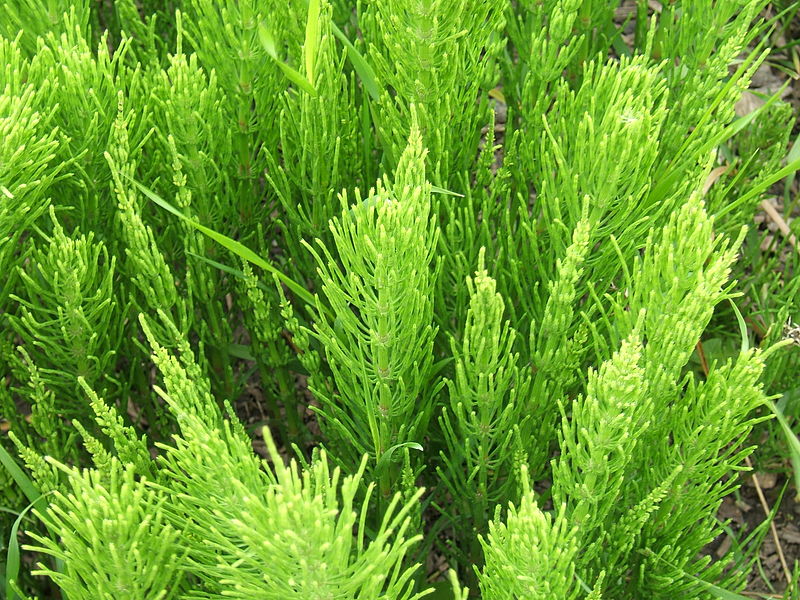 The plant body is sporophyte. It is composed of rhizome, aerial branches, scale leaves and roots.

2.  Leaves: Each node has a whorl of small scale leaves. These leaves form sheathing at the base of node. Leaves perform little photosynthesis.

3.  Roots: Roots are adventitious. Roots arise in whorls at the nodes of the rhizome.

Internally the stem is differentiated into epidermis, cortex, and central stele.

1. Epidermis: It is the outermost layer. Epidermis consists of a single layer of cells. Cell wall of these cells is highly silicified. Stomata are present in the epidermis. Stomata are absent in the underground portion or rhizome.

2.  Cortex: Cortex is present between epidermis and endodermis. Cortex has long canals called vallecular canals. Cortex is composed of parenchymatous cells. There are large bands of sclerenchyma in the peripheral portion of the cortex. These sclerenchyma bands form the main supporting tissue. Loosely arranged parenchymatous cells of cortex contain chloroplasts. They are called chlorenchyma. They are the main photosynthetic tissue of the plant.

3.  Endodermis: Endodermis is present inner to cortex. Endodermis is formed of a single layer. These cells have the characteristic casparian bands on the radial walls.

4.  Pericycle: Pericycle is present inner to the endodermis. It consists of a single layer of parenchymatous cells. 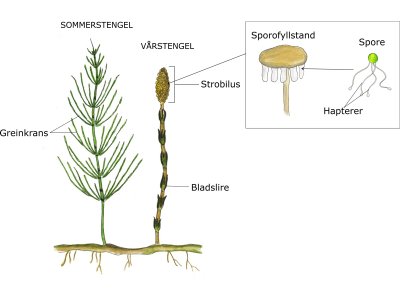 5.  Stele: Parenchymatous cells form the ground tissue of the stele. Pith is present in the centre. In the primary aerial branch this pith has central canal. But these canals are absent in the rhizome and lateral branches.

Internal structure of the rhizome is similar to aerial branches. But it has no central canal in the pith. Its epidermis is without stomata. It also has no chlorenchyma in the cortex.

Internal Structure of the Root

Each mature root has a single layered epidermis. Cortex is composed of parenchymatous cells. Two layers of endodermis are present below the cortex. Cells of the inner layer of endodermis give rise to the secondary branches of the root. A definite pericycle is absent in roots. Stele is present in the centre. It is without pith.

Equisetum is homosporous. The cones or strobili are produced at the apex of branches. Each cone has an elongated central axis. Sporophylls or sporangiophores are attached on it. Sporophylls have a stalk and flattened head. Sporangia are attached to the underside of the head of the sporophyll. Sporangium fills the whole space between the head and the central axis. The heads the sporophylls are closely attached with each. They become hexagonal in outline. A ring like outgrowth annulus is present at the base of the axis. The number of sporangia on each sporophyll varies from 5-10.

1.  A single cull initiates die development of each sporangium. It divides into an inner and an outer cell.

2.  The inner cell further divides to produce the sporogenous tissue or archesporium. Outer cell takes part in formation the sporangial wall. Wall of the sporangium consists of several layers of cells. The inner most layer is the tapetum. The cells of the outer layer develop spiral thickenings on their walls.

3.  One third archesporial cells enlarge and become spore mother cells. The remaining cells disintegrate to a mucilaginous liquid. This liquid provides the nourishment to the developing spores.

4.  Each spore mother cell divides meiotically to form four spores. Wall of spore becomes four layered. The outer most layer epispore splits to form four bands. These bands separate from the spore wall on drying. These bands are called elaters or Hapetra. They coil round the spore under moist conditions. These elaters help in the splitting of the sporangial wall.

Germination of spore and formation of Prothallus

The spore germinates on suitable substratum. It divides into two unequal cells. Smaller cell forms the first rhizoid. It forms many rhizoids on the underside of prothellus. The larger cell divides to produces prothallus. Peripheral cells of prothellus are meristematic. They divide to increase the size of prothellus. It produces circular prothallus or gametophyte. Many short, multicellular lobes are produced on the upper side.

Sex organs are produced on the upper side. The upper portion of mature prothallus has green cells and a lower portion has colourless cells. Spores of Equisetum produce two types of prothalli. Half of the spores produce smaller male prothellus. The remaining half produces large female prothellus. But sometimes, female prothellus produces antheridia. So Equisetum is not perfectly dioecious.

Sex organs are produced at the margin of the prothallus. But later they are embedded in the thallus. Antheridium

1.  Each antheridium is produced from a superficial cell. This cell divides to produce outer jacket initial and an inner androgonial initial.

3.  Each androgonial cell divides to produce two androcytes or antherozoid mother cells. Each androcyte is changed into an antherozoid. Antherozoid is spirally coiled. It has a row of cilia near the upper end. The mature antherozoids come out by the lifting of the opercular cell of the wall.

1. Archegonium also develops from a superficial cell of the thallus. This cell divides to produce an upper neck initial and a lower central cell.

2. The neck initial divides to produce a neck. Neck is composed of four vertical rows of cells. The central cell divides transversely to produce an upper neck canal initial and lower ventral cell.

3. The  neck canal initial produces a row of two or three neck canal cells. The ventral cell divides to produce a large egg or oosphere at the base and a smaller ventral canal cell. The surrounding tissue of the thallus forms the wall of the venter. The mature archegonia lie on the dorsal side of the thallus Primary leaf sheath.

The ventral canal cell and the neck canal cell of mature archegonia disintegrate. It forms passage for the antherozoids. Several antherozoids enter the archegonia. But only one of them fuses with the egg. The fertilized oosphere develops a wall and becomes the oospore.

2.  The hypobasal portion divides to produce a foot and the first root. The root grows downward into the soil by passing through the gametophyte. The epibasal cell divides to form an apical cell and adjacent cells.

3.  The adjacent cells produce the first whorl of three scale leaves. The apical cell produces the first branch (primary branch) of 10-15 Sin:nodes. Each node has a whorl of threeiletwes.

5. One secondary branch grows horizontally into the soil and forms the rhizome. The rhizome gives rise to the vertical aerial branches. 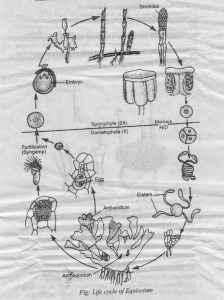 Equisetum shows a regular alternation of sporophytic and gametophytic generations. The sporophyte is diploid generation. It produces haploid spores after meiosis. These spores germinate to give rise to the gametophyte or prothallus. The gametophyte produces antheridia and archegonia in which male and female gametes are produced. The union of male and female gametes produces diploid oospore. Oospore gives rise to the sporophyte.