Plant breeding is the purposeful manipulation of plant species in order to create desired genotypes and phenotypes for specific purposes. This manipulation involves either controlled pollination, genetic engineering, or both. It is followed by artificial selection of progeny. Plant breeding often leads to plant domestication. 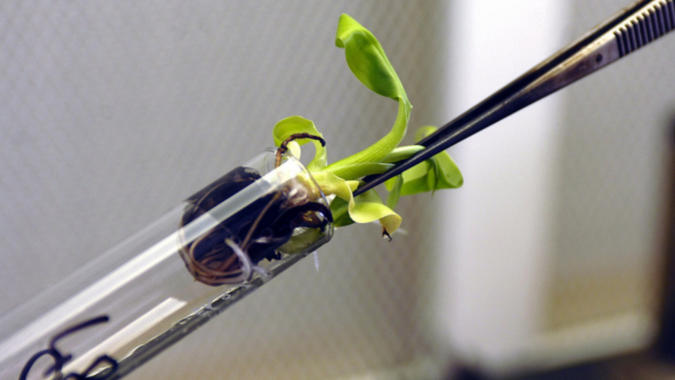 Plant breeding has been practiced for thousands of years, since near the beginning of human civilization. It is now practiced worldwide by government institutions and commercial enterprises. International development agencies believe that breeding new crops is important for ensuring food security and developing practices of agriculture through the development of crops suitable for their environment. The choice of plant breeders for plant breeding is:

Domestication of plants is an artificial selection process conducted by humans. It produces plants that have fewer undesirable traits of wild plants. It makes them dependent on artificial environment. Many crops in present day cultivation are the result of domestication in ancient times, about 5,000 years ago. A cultivated crop species that has evolved from wild populations due to selective pressures is called a landrace. Landraces are plants that are ideally suited to a particular region or environment. An example of the landrace of rice, Oryza sativa subspecies indica. It was developed in South Asia. Oryza saliva subspecies japonica was developed in China.

The basis of all plant breeding is selection. or the picking out of plants. These selected plants have best combinations of agricultural and quality characteristics. Seeds from the selected plants are used to produce the next generation. From which a further cycle of selection is carried out. Conventional breeding is divided into three categories.

Following types of crosses are used in these plants:

(a) Pedigree Breeding: There is a great advantage of self- pollinating crop species like wheat, barley, oats, and many edible legumes. Once they are genetically pure, varieties can be maintained without change for many generations. Genetic variation can be produced among which selection can be practiced. This is achieved by artificially hybridizing between parental varieties possessing different desirable traits. This system is known as pedigree breeding. This method is most commonly used.

(b) Backcrossing: Another form of breeding used for self- pollinating species is backcrossing. This is used when an existing variety is broadly satisfactory. But it lacks one useful and simply inherited trait. This trait is found in some other variety. Hybrids are made between the two varieties. The first hybrid generation is crossed, or backcrossed, with the satisfactory variety which is known as the recurrent parent. Backcrossing is very useful in practice. It has been extensively used in adding resistance to diseases, such as rust, smut, or mildew.

(c) Inbreeding: Natural populations of cross-pollinating species have great genetic diversity. No seed parent is true-breeding. In such plants, a system developed in which hybrid vigor is exploited.

Varieties of asexually propagated crops consist of large number of genetically identical plants. There are only two ways of introducing new and improved varieties: by sexual reproduction and by the isolation of somatic mutations. The latter method is often used successfully or decorative plants like chrysanthemum. New forms of potato have occasionally arisen in this way. When sexual reproduction is used, hybrids are produced on a large scale between existing varieties.

Cell technologies have been used to extend the range and efficiency of asexual plant propagation.

Breeding of Seedling Populations: Interspecific hybridization within a plant species was demonstrated by Charles Darwin and Gregor Mendel. It was further developed by geneticists and plant breeders. In the early 20th century, plant breeders realized that Mendel’s findings on the non-random nature of inheritance can applied to seedling populations.

Heterosis: In 1908, George Harrison Shull described heterosis or hybrid vigor. Heterosis describes the tendency of the progeny of a specific cross to outperform both parents. The detection of the usefulness of heterosis for plant breeding has led to the development of inbred lines. Maize was the first species in which heterosis was used to produce hybrids.

Cytoplasmic Male Sterility (CMS): In 1933, another important breeding technique, cytoplasmic male sterility (CMS), developed in maize. It was described by Marcus Morton Rhoades. CMS is a maternally inherited trait that makes the plant to produce sterile pollen. It enables the production of hybrids and removing the need for DE-tasseling maize plants.

Wide Crosses: Plant breeders used a number of plant tissue culture techniques to produce progeny from fruitless mating. Interspecific and intergeneric hybrids are produced from a cross of related species. These crosses are called wide crosses. The cereal triticale is a wheat and rye hybrid. The first generation created from the cross was sterile. So, the cell division inhibitor colchicine was used to double the number of chromosomes in the cell. Cells with an uneven number of chromosomes are sterile.

Embryo Rescue: Failure to produce a hybrid may be due to pre- or post-fertilization incompatibility. If fertilization is possible between two species or genera, the hybrid embryo may abort before maturation. If this does occur the embryo resulting from an interspecific or intergeneric cross can be rescued and cultured to produce a whole plant. Such a method is referred to as Embryo Rescue. This technique has been used to produce new rice for Africa, an interspecific cross of Asian rice (Oryza sativa) and African rice (Oryza glaberrima).

Somatic hybridization: Hybrids may also be produced by a technique called protoplast fusion. In this case, protoplasts are fused usually in an electric field. Cell fusion may lead to nuclear fusion. It produces an amphi-diploid somatic hybrid cells. Fusion products, of closely related but sexually incompatible plants have been grown to flowering plants. The most famous example is potato (Solanum tuberosum + Lycopersicon esculentum).

Soma-clonal Variations: Chemical mutagens like EMS and DMSO radiation and transposons are used to generate mutants with desirable traits. Classical plant breeders also generate genetic diversity within a species by exploiting a process called soma-clonal variation. It occurs in plants produced from tissue culture, particularly plants derived from callus. Induced polyploidy, and the addition or removal of chromosomes using a technique called chromosome engineering may also be used.

Micropropagation: In micropropagation and cloning, tissues are excised from root, stem, petiole, or seedling. They are induced to regenerate plants. All regenerates from tissues of one source plant constitute a clone.

Anther Culturing: Microspore or Anther culture is the generation of plants from individual cells one set of chromosomes, haploid cells. Microspores arc isolated from anthers and cultured on nutrient media, or entire anthers are cultured in this manner. Doubling of chromosomes that may occur spontaneously. It can be induced by treatment with colchicine leads to the formation of homozygous dihaploid plants.