Steps of Protein Synthesis In Relation To Translation 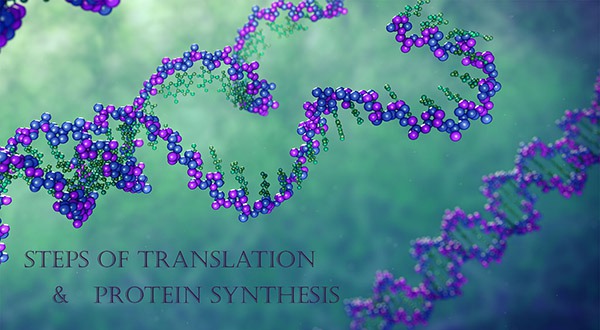 Role of tRNA in Translation

Transfer RNA (tRNA) plays important role in translation. It reads codes on the mRNA and brings different amino acids. Thus, a polypeptide chain is formed. The tRNA has complementary pairing of bases. But tRNA has some unusual bases. These bases disrupt the normal base pairing and forms loop in the molecule. The center loop is called anticodon loop. It has a sequence of three unpaired bases called the anticodon. The mRNA codon form pairing with its complementary anticodon of tRNA. The tRNA carries amino acids.

Role of Ribosomes in Protein Synthesis

Ribosomes are the sites of protein synthesis. They consist of large and small subunits. These subunits organize the pairing between the codon and the anticodon. Ribosome has several binding sites mRNA and tRNA. Ribosome has three sites:

(a) P site (peptidyl site): It is the site of the ribosome where peptide bonds are formed.

(b) A site (aminoacyl site): This site contains successive (next) amino acid with its rRNA.

(c) E site (exit site): It is a site of ribosome where tRNA is present, 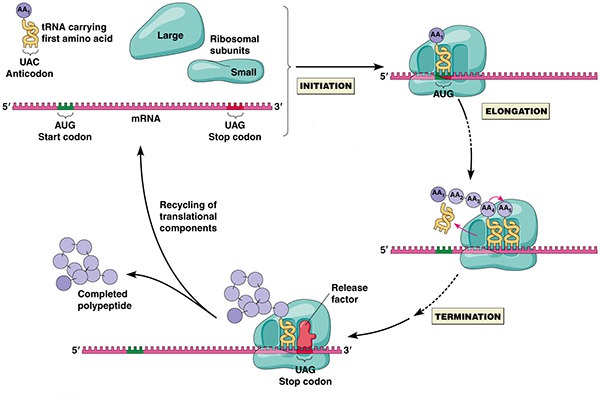 There are following steps of protein synthesis:

Initiation The First Step of Translation

The A (aminoacyl) site is present next to the P site. It has second codon. A second tRNA attaches on this codon with its anticodon. Two tRNA molecules with their amino acids are now side-by-side in A-sites. This step requires enzyme and energy. Guanine triphosphate (GTP) provides energy to this step. An enzyme peptidyl transferase breaks the bond between the amino acid and tRNA in the P site. It also catalyzes the formation of a peptide bond between that amino acid and the amino acid in the A site.

The mRNA strand then moves along the ribosome. It exposes new codon. The tRNA with their amino acids moves to P site. A third tRNA can now enter the exposed A site. This process continues and all the entire mRNA has been translated.

The ribosome reaches at the end of the mRNA. The polypeptide chain has been synthesized. Termination codon like UAA comes and translation ends.

Protein synthesis occurs on ribosomes. Most of the ribosomes are attached on the surface of the rough endoplasmic reticulum. The newly synthesized protein moves into the ER. The protein then moves into the Golgi Apparatus. It is packed into a secretory vesicle or a lysosome.