Stomatal Regulation of Transpiration
Since the aerial surfaces of land plants are in direct contact with atmosphere they face the problem of evaporation, which may lead to death because of dehydration. To overcome this problem their aerial surfaces are covered with thick cuticle. But the cuticle blocks exchange of essential gases, the oxygen and carbon dioxide. To facilitate exchange of gases the epidermis is provided with minute pores, the stomatal pores, however these pores also promote transpiration. It has been observed that these pores are ideally adapted for conditions are suitable for photosynthesis and close during night when photosynthesis is not taking place.
The loss of water is regulated by stomata and it depends much on opening and closing of stomata. It has been observed that rate of transpiration is higher when the stomata are open and it is reduced when the stomata are closed. It has also been observed that when the water in soil is depleted but enough sunlight is there, the stomata open less or even remain close to prevent loss of water.
Structure of Stomata 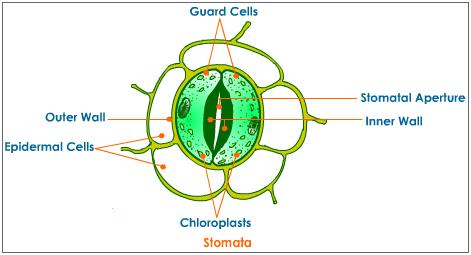 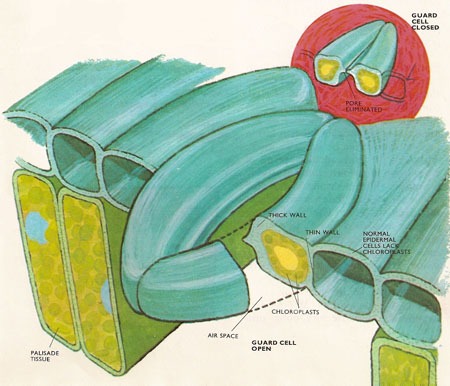 The guard cells has usually thick walls compared to other leaf cells. The ventral wall (adjacent to stomatal pores) is more thickened as compared to dorsal wall (in contact with epidermal cells). The thinking is due to the cellulose microfibrils in the guard cells and help in opening and closing of stomata. Kidney shaped guard cell the cellulose microfibrils fan out radially from pores, thus the cell girth is reinforced like a steel belted tire, and the guard cells curve out to widen the stomatal pore. On the other hand, the inflatable bulbous ends of dumbell shaped guard cells swell and increase in volume as a result the beams are separated from each other and the slit between them widens. The guard cells are uninucleate, contain small vacuoles and few chloroplasts in which only light phase of photosynthesis occurs.
Stomata Physiology – Mechanism of Opening and Closing of Stomata Changes in Turgor of Guard Cells
H. Van MAI,