A bacterial cell consists of various components. Some of these are external and the others are internal to the cell wall. The external components include capsules and slime layers, flagella and pilli. Some structures are present only in certain species. 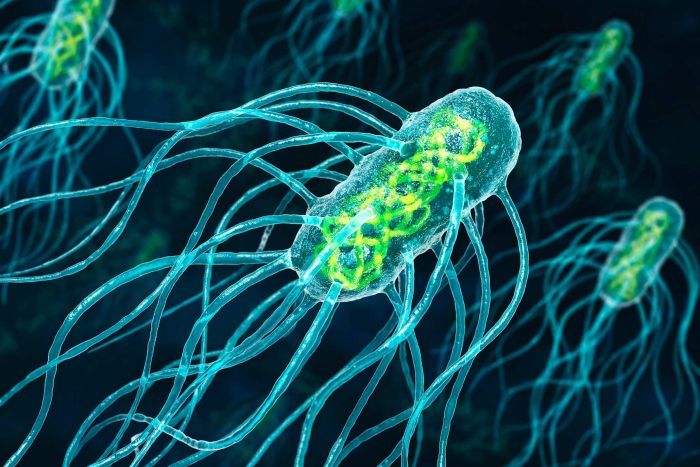 Many bacteria secrete sticky substance that form protective layers called capsule outside the cell wall. In some cases, this layer is diffusing and known as slime layer. Most bacterial capsules are composed of polysaccharides while a few capsules are polypeptides. The glue-like of nature of capsule helps bacteria to adhere to their substrate or unite to form colonies. The capsule provides increased resistance to disease-causing bacteria against antibiotics.

Most bacteria are motile and the organs of locomotion are hair-like helical cytoplasmic appendages, the flagella. The flagella may be present at one or both ends of the bacterial cell. In some cases, they appear along sides or all around the bacterium.

The motile as well as non-motile species hollow filamentous rods called pilli or fimbriae. These are composed of a protein pilli. There are concerned with cell to cell attachment. The F pilus or sex pilus, are involved in bacterial mating during sexual reproduction. 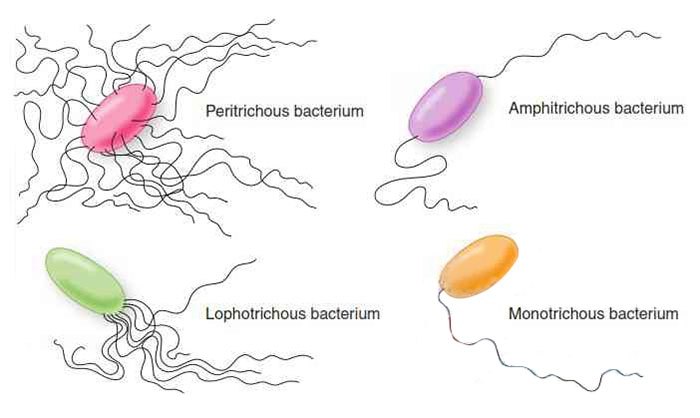 The cell wall is present beneath the capsule and external to cytoplasmic membrane. It is a rigid structure that gives shape to the cell. The cell wall is necessary for bacterial growth and development. Those cells which cell has been completely removed are incapable of normal growth and division.

It is present immediately beneath the cell wall and surrounds the living matter of the bacterial cell. It is semi-permeable membrane and composed of phospholipid (about 20 to 30 percent) and proteins (about 60 to 70 percent). The phospholipids form a bilayer in which most proteins are embedded. It also acts as site of energy production (ATP) and attachment for the bacterial DNA.

Mesosomes: Mesosomes are infoldings of the cell surface membrane. They appear to be associated with DNA during cell division, facilitating the separation of the two daughter molecules of DNA after replication and aiding in the formation of new cross-walls between the daughter cells.

Photosynthetic Membranes: Among photosynthetic bacteria, tubular or sheet-like infoldings are produced by cytoplasmic membrane. These resemble thylakoids in Cyanobacteria (blue-green algae) and contain photosynthetic pigments, the bacteriochlorophyll. These are sites of photosynthesis.

The cell material bounded by the cytoplasmic membrane is cytoplasm. It can be differentiated into a liquid part called cytosol an area in which nuclear material is concentrated, and a portion rich in ribosomes.

Ribosomes: The ribosomes are RNA-protein bodies that lie freely in the cytoplasm mostly, and concerned with protein synthesis. They are seen as dense particles, the polysomes. Each ribosome consists of two subunits, 50S and a 30S subunit formed of equal amounts of RNA and proteins. They are smaller in size than the ribosomes found in eukaryotic cells and sediment at 70 Svedberg units (70S).

In most bacteria, the DNA is concentrated as a mass of fibers and the region of the cytoplasm containing it stains less than surrounding cytoplasm. It is called nucleoid region or nuclear body. In Escherichia coli, the bacterial chromosome is in the form of a ring of double-stranded DNA molecule. 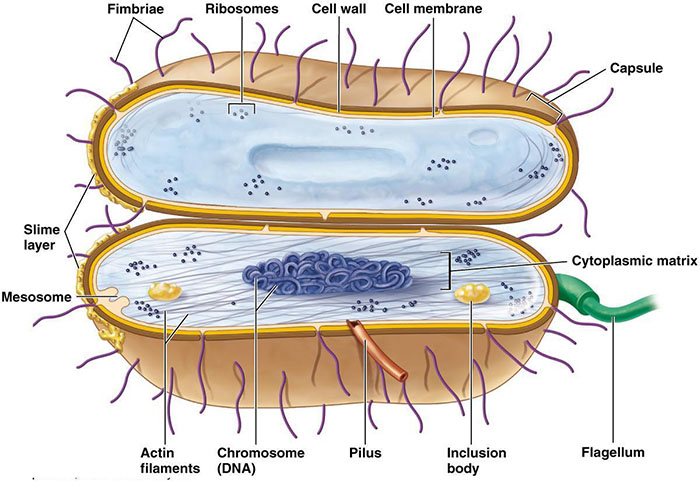 In addition to the normal DNA chromosome, the bacterial cell may have much smaller rings of DNA called plasmids. Each plasmid consists of few genes and is capable of self-replicating independent of main chromosome. There are, certain plasmids that provides resistance against antibiotics or disinfectants. They contain genes whose products (enzymes) destroy these substances. Others help in cleaning oil spills and producing protein from petroleum. There are certain plasmids that are capable of integrating into the bacterial DNA chromosome, they are called episomes.

Bacteria produce resistant b dies called spores within cells (endospores) or external to cell (exospores), for example in Bacillus and Clostridium spp. These can resist heat, desiccation and radiation and help to overcome unfavorable growth conditions. At the advent of favorable conditions, the spores germinate to form a new cell.

In some bacteria, for example Azotobacter, whole cell develops into a thick-walled, resistant body called cyst. These germinate into new individuals when the conditions are favorable for growth.

Some aquatic species form gas vacuoles that provide buoyancy. These are hollow, rigid cylinders with a protein boundary impermeable to water, however dissolved gases can penetrate the body.

2017-06-20
admin
Previous: Are Orchids the Best of the Vascular Plant Family?
Next: Add Beauty to Your Home with a Lush Garden