The Cell Wall And Its Structure

Cell wall is a characteristic of a plant cell and it distinguishes it from the animal cell. The cell wall is considered as an Ergastic Substance, i.e., secreted by the living substance (protoplasm) but it-self is non-living. The synthesis of cell wall is controlled by Golgi complex.

Three layers of cell wall can be distinguished:

It is the cement that holds the individual cells together and it is found between the primary cell walls of neighbouring cells. It is an amorphous substance and isotropic. It may also fill the intercellular spaces in the supporting tissue. The middle lamella mainly consists of pectic substances. The pectinase enzyme can dissolve the middle lamella and as a result the tissue can separate into individual cells. This process is termed as Maceration.

It is the first wall that develops in the new cell by protoplasm. The wall is formed of cellulose. It is the wall develops in growing cells. It is thin and elastic.

It is found on the inner surface of the primary wall. It begins to develop in cells or parts of them which have ceased to grow. Generally, three layers of secondary wall can be observed the outer layer, central layer and the inner layer. The central layer is usually the thickest. It mainly consists of cellulose and is rigid.

In some cases, a wall is present on the inner side of the secondary wall. This is called tertiary wall. It is dried up residue of degenerated plasma lining.

On both sides of the middle lamella, thin lamellae are laid down by the daughter protoplast. This is the beginning of the development of the new walls of the daughter cells. The walls consist of cellulose Microfibrils and of non-cellulose matrix. The matrix of the wall consists of pectic substances and hemicelluloses.

The new and old middle lamellae are separated from one another by the primary wall of the parent cell. The secondary wall develops on the inner surface of the primary wall and is composed of cellulose microfibrils. The matrix consisting of polysaccharides, deposit of lignin, suberin, cutin, waxes etc.

Cell wall has complex structure and can be divided into different layers. Cell walls vary greatly in composition and morphology according to the age and function of cell. It has following demarcation. 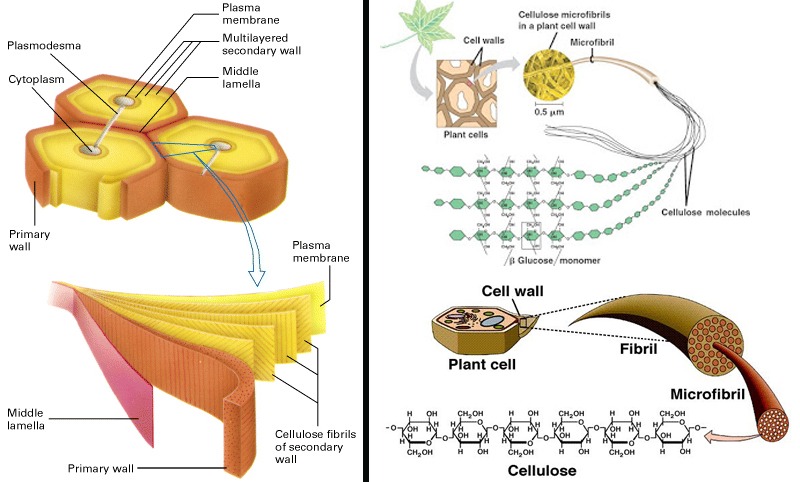 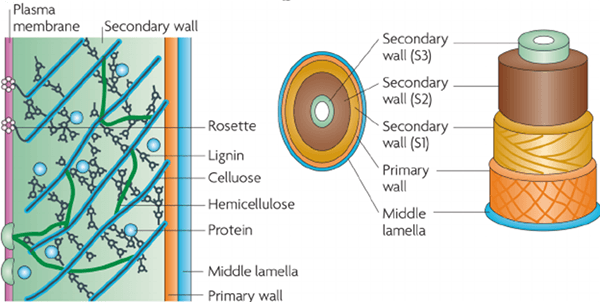 Annular (Ring-Like): Rings of lignin are deposited one above the other in the anterior of the original c ell wall.

Spiral (Helical-Like): Thickening of lignin are deposited in the form of spiral bands.

Scalariform (Ladder-Type): Lignin is deposited in the form of the steps of a ladder along the inner side of the cell wall.

Reticulate: The lignin thickening is deposited in irregular manner and a network is formed.

The cell is composed of following chemical compounds.

It is a carbohydrate and the most common compound present in cell walls. It is a hydrophilic, Crystalline, compound polysaccharide. The molecules of the cellulose are chain-like and are formed by glucose residues held together by oxygen though beta-linkage. Most of the cell wall is formed of it.

Hemicellulose: It is a group of polysaccharides with different solubilities, such as xylans, mannans, glucans, etc.

They are closely related to the hemicelluloses. They found in three forms, protopectin, pectic and pectic acid and are polymers composed of uronic acid. The pectic compounds are amorphous and hydrophilic. They form middle lamella.

It is a polymer of high carbon content, distinct from carbohydrates. The lignin of conifers and dicots differ from one another. Its deposition bring change in the chemical nature off cell wall.

These are fatty substances, Cutin and Suberin are closely related, polymerized compounds consisting of fatty acids. Suberin occurs in association with cellulose in cork cells of periderm. Cuin occurs with cellulose in the outer walls of epidermis. Cutin forms a contnous layer, The Cuticle, on the surface of the epidermis of all aerial parts.

These are related to pectic substances and swell up in water. Gums appear in plants due to break-down of wall and cell components. Mucilages appear in some gelatinous or mucilaginous types of cell walls.

The intercellular spaces are formed by two methods:

Sometimes the intercellular space is formed by the dissolution of entire cell. Such intercellular spaces are termed as Lysigenous Intercellular Spaces for example, large air spaces present in aquatic plants and in some monocot roots, and secretory cavities found in Citrus.

Cytoplasmic stand like structure extending from protoplasts into the cell wall and interconnecting the living protoplasts of the plant body are called Plasmodesmata. These are found in red algae, mosses, gymnosperms and angiosperms. They may be found throughout all living tissues. The plasmodesmata occur either in groups or are distributed throughout a wall.

The plasmodesmata are considered to be concerned with transportation of materials and conduction of stimuli. They are also regarded as channels for the movement of viruses, from cell to cell. 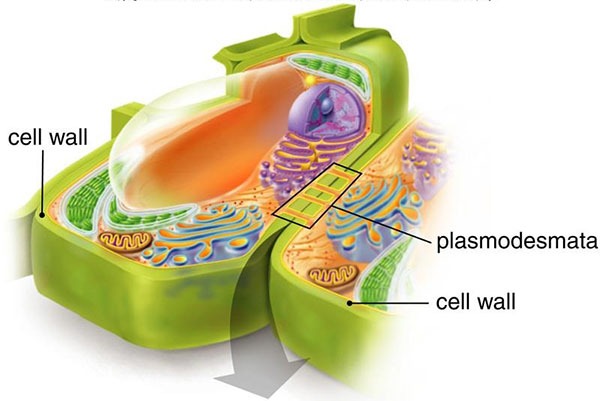 The substances pass through the pits from cell to cell. Generally, each pit has a complementary pit exactly opposite it, in the wall of the neighbouring cell. Such pits form a morphological and functional pair called the Pit Pair. The cavity formed by the break in the secondary wall is called Pit Cavity. The membrane consisting of primary cell walls and middle lamella, separating the pit-cavities f the pit-pair, is called Pit Membrane or Pit Closing Membrane. The opening of the pit on the inner side of the cell wall, i.e., towards the cell lumen, is called Pit Aperture.

The pits are of two types:

Simple Pits: The secondary walls are deposited in such a way that it does not overarch the pit cavity. Such pits are termed as simple pits.

Bordered Pits: The secondary wall develops over the pit cavity to form an overarching hood with a narrow pore in the centre.

Blind Pit: If the pit is without its opposite partner or opposite it an intercellular space is present, it is called Blind Pit.

The pit cavity of a simple pit may have uniform diameter throughout its length, or it may widen or marrow toward the pit aperture. Simple pits are usually found in parenchyma cells, fibres and in Sclereids.

In some plants, pit membrane of a bordered pit-pair is thickened in the centre in the form of a disc. This thickening is called Torus. 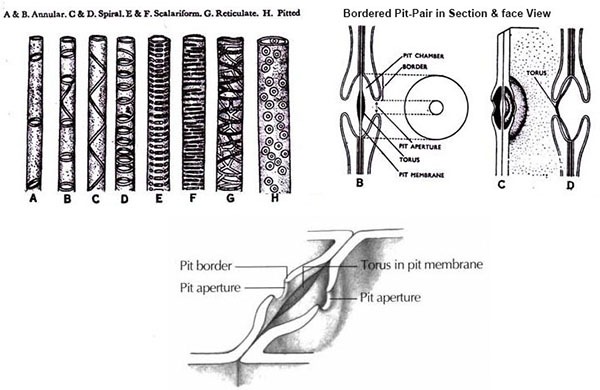