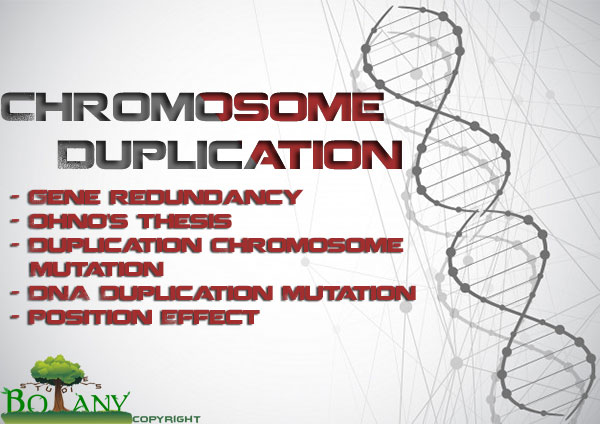 Chromosome duplication occurs when any part of the genetic material – A single locus or a large piece of a chromosome is present more than once in a genome. As in deletions pairing in heterozygotes may produce a compensation loop. Chromosome duplication may arise as a result of unequal crossing between synapsed chromosomes during meiosis or through a replication error prior to meiosis. In the former case, both a duplication and deficiency are produced.

What is Gene Redundancy

The chromosome duplication results in Gene Redundancy. Although many gene products are not needed in every cell of an organism, other gene products are known to be essential components of all cells. For example, ribosomal RNA must be present in order for protein synthesis to occur.

The more metabolically active a cell is, the higher is the demand for this molecule. In theory, a single copy of the gene for the precursor r-RNA molecule would be inadequate in most cells. Studies using the techniques of molecular hybridization, which allows the determination of the percentage of genome coding for specified RNA sequence, have shown that there are multiple copies of the genes coding for r-RNA.

In Drosophilla apparent X-Iinked mutation Bobbed has, in fact, been shown to be due to a deletion of a varying number of genes coding for r-RNA. Mutant flies have low viability, are underdeveloped, and have bristles reduced in size.

General development as well bristle formation, which occurs rapidly during normal pupal development, apparently depend on a great number of ribosomes to support translation. Several Bobbed alleles have been studies, and catch has been shown to involve deletions of different sizes.

The extent to which both viability and bristle lengths are decreased correlates well with the relative number of RNA genes deleted. Thus, we may conclude that the normal r-DNA redundancy observed in wild type Drosophilla is the minimum required for adequate ribosome produce during normal development.

Chromosome Duplication may cause phenotypic variations that may at first appear to be caused by a simple point mutation. The Bar Eye phenotype in Drosophilla is an example. Instead of normal oval eye shape, Bar-eyed flies have marrow, slit-like eyes.

This phenotype appears to be inherited as sex-linked mutation.  Both heterozygous females and hemizygotes males exhibit the trait, but homozygous females show or more pronounced phenotype than either of these two cases.

About ten years later, Calvin Bridge and Herman J. Muller compared the polytene X-chromosome banding pattern of the Bar fly with that of the wild-type flies. Their studies revealed that one copy of region 16A of X-chromosome was present in wild-type flies and that this region was duplicated in Double Bar flies.

Those observations provided evidence that the Bar phenotype is not the result of a conventional mutation but is instead a duplication. The Double Bar condition originate as a result of unequal crossing over, which produces triplicated 16A region.

When the eye facet phenotypes of B/B and B/BD flies were compared, an average of 68 and 45 facets are found, respectively. In both cases, there are two extra 16A regions. When the repeated segments are distributed on the same homologue, the phenotype is more pronounced. Thus, the same amount of genetic information produces a slightly different phenotype depending on the position of genes. This is known as Position Effect.

In 1970, Susmo Ohno suggested that gene duplication or chromosome duplication plays an important role in evolution. According to him, gene duplication is necessary for the origin of new genes during evolution. Ohno’s thesis is based on the supposition that the gene products of all unique genes, presents as only a single copy in the genome, are indispensable to the survival of any species during evolution. Therefore, unique genes are not free to accumulate mutations sufficient to alter their primary function and give rise to new genes.

However, if any essential gene were to become duplicated, the new copy would be inherited in all future generations. Since it is an extra copy, therefore major mutational change may not jeopardize the species because the original gene still provides the genetic information for its essential function.

The duplicated copy is now free to undergo large number of mutational changes within the organisms of any species over long periods of time. Then, the gene may change sufficiently that its product assumes a divergent role in the cell.

The new function may be unique enough to impart an adaptability and survival advantage to organisms carrying such unique genetic information.

Ohno’s thesis is based on the discovery of proteins with divergent functions but whose amino acid sequence is very similar. According to current knowledge of the genetic code, amino acids sequence homology suggest nucleotide sequence homology.

Similarity at gene level suggest a common origin. So far, many pairs of related but with distinct functions which share amino acid homology have been discovered. These include trypsin and chymotrypsin, myoglobin and heamoglobin, heamoglobin sub-units, and the light and heavy immunoglobin chains.

Ohno’s thesis is gaining support with the accumulation of more and more data. As a result, the gene duplication may be considered an important mechanism in the production of genetic variability and in the process of evolution.