The Translocation Mutation And Down Syndrome [ Definitions and Details] 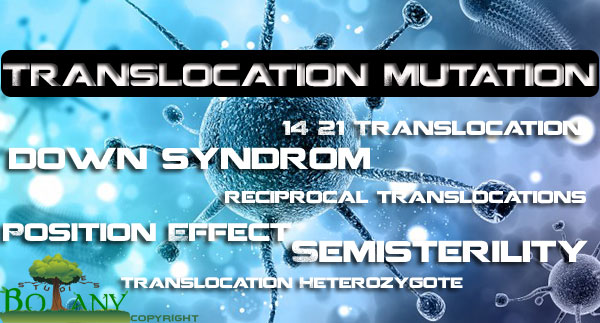 The genetic information is not lost or regained as a result of translocation mutation. Rather there is only a rearrangement of genetic material. The presence of DNA translocation does not, therefore, directly alter the viability following fertilization.

Translocation mutation, same as chromosomal inversion may also produce position effect (If the expression of a gene is altered as a result of its relocation, a change in phenotype may result. Such a change is called Position Effect) because they may realign certain genes with other genes or to the heterochromatic area. This exchange does, however, create a new genetic linkage relationship which can be detected experimentally.

In Fig: 1.1, homologs heterozygous for a reciprocal translocation are shown to undergo unorthodox synapsis during meiosis, resulting in a cross-like (+) configuration. As with inversions, genetically unbalanced gametes are also produced. In the case of translocation mutation, however, aberrant gametes are not necessarily the result of crossing over.

To see how unbalanced gametes are produced, focus on the homologous centromeres in Fig: 1.1. According to the principle of independent assortment, the chromosome containing centromere 1 will migrate randomly towards one pole of the spindle during the first meiotic anaphase; it will travel with either the chromosome having centromere 3 or centromere 4.

These contain a complete complement of genetic information and are balanced. The other two potential products, the 1, 3 and 2, 4 combinations, will contain chromosomes displaying duplicated and deleted segments. When incorporated into the gametes, the resultant meiotic products are genetically unbalanced. If they participate in fertilization, lethality is the usual result.

Therefore, only about 50% of the progeny of the parents heterozygous for a reciprocal translocation survive. This condition is called Semisterility. 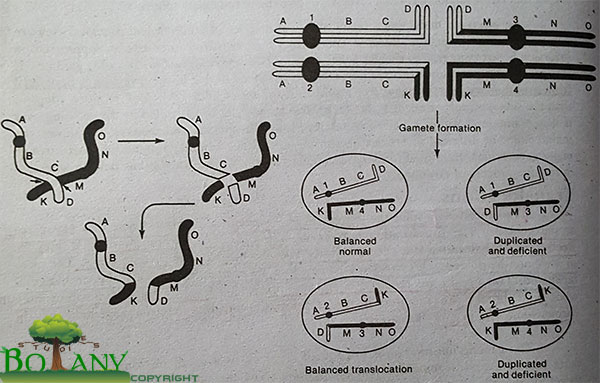 During the transition from the diplotene stage to diakinesis in meiotic prophase I, the chiasmata terminalize as the chromosome begins to pull apart. When non-homologous chromosome pairs contain a series of reciprocal translocations, chromosome rings may be produced. The pairing configuration in this situation becomes quite complex.
Depending on the alignment of centromere pairs and the position of chiasmata various configurations may be seen before the first anaphase. In Fig: 1.2: an alternating alignment has occurred, resulting in three rings. Many other variations have been detected cytologically in a variety of plants. 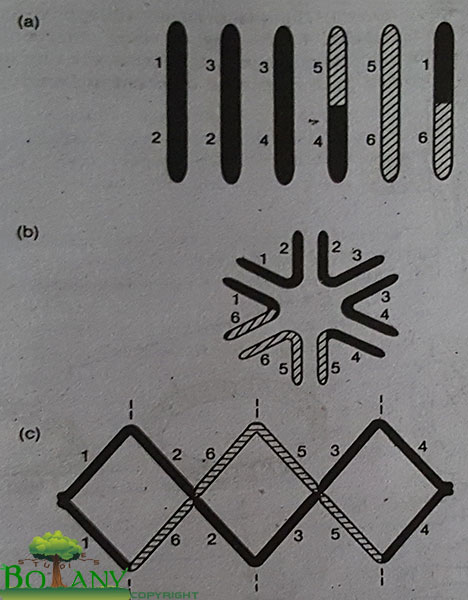 Fig: 1.2: A set of reciprocal translocations: (a) Translocation Heterozygote: (b) Synaptic arrangement at pachytene; (c) Metaphase I (Zigzag configuration)

If a translocation is present in one of the two sets of chromosomes, this will be a Translocation of Heterozygote. In such plants, the normal pairing into bivalents will not be possible in translocated chromosomes.

Due to pairing between homologous segments of chromosomes, a cross-shaped (+) figure involving four chromosomes will be observed at pachytene, The genetic techniques for studying translocations will be more easily understood when the cytological phenomena produced by translocations are known.

Suppose that two chromosomes having respectively the genes ABCDEF and GHIJ KL exchange sections and give rise to translocation chromosomes ABCJKL and GHIDEF. The individual formed will be a translocation heterozygote.

The occurrence of crossing over in each of the four arms of the cross will result in the formation of chiasmata in each arm. Instead of bivalents, Quadrivalents, a group of four associated chromosomes; each member of the group being partially homologous to two other chromosomes in the group, is formed.

The quadrivalents will appear in the form a Ring or Circle at diakinesis and at metaphase I. The ring or circle may be Twisted or Open. If chiasmata fail to be formed in one arm of the pachytene cross, the ring is transformed into an Open Chain of four chromosomes. Such rings were observed in Datura, Maize, Wheat, Peas, etc. 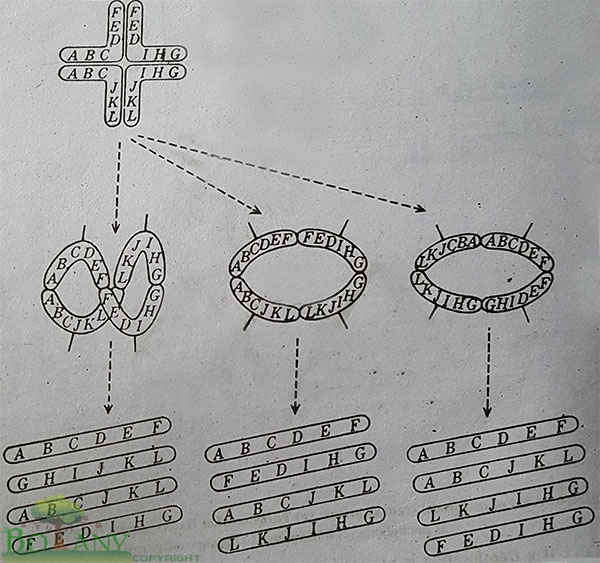 Fig: 1.3: Reduction division in a Translocation Heterozygote and gametes formed as a result of it

The distribution of chromosomes of the ring can take place variously to gametes. The two original chromosomes ABCDEF and GHIJKL may go to the same gamete and the translocation chromosomes ABCJKL and GHIDEF to another gamete. In these gametes, every gene is present once only.

On the other hand, if chromosomes adjacent in the ring go to the same pole at the meiotic division, the following four kinds of gametes will be formed:

These gametes carry certain genes twice (duplications) and do not have some genes (deficiencies). In most plants, pollen grains containing deficiencies and duplications are inviable and are aborted. Such pollen grains appear empty and shriveled and can be distinguished easily from the pollens having normal chromosomal complements.

Embryo sacs with chromosome duplications and deficiencies may also abort. The plants heterozygous for translocations may produce fewer seeds than normal and such plants appear Semisterile. Semiterility may also be produced by lethal genes as well.

Numerous translocations were revealed in Human Population as early as in 1959. One common type of translocation involves break at the end of the short arms of two non-homologous chromosomes (acrocentric chromosomes).

These small segments are lost and the larger segment fuse at their centromeric region. This type of translocation produces a new, large submetacentric or metacentric chromosome and is called Centric Fusion Translocation.

This aberration may produce only minor deficiencies and, in many cases, the affected individual may survive. This type of translocation was first discovered in 1959 in an abnormal child who was mentally retarded and suffered from severe spinal malformations.

A similar translocation accounts for cases in which Down’s Syndrome is inherited or Familial. The instances of Down’s syndrome are due to trisomy 21. This chromosomes result from non-disjunction during meiosis of one parent. The down syndrome typically is caused by the existence of a part of the third copy of chromosome 21 or by all.

Down syndrome symptoms includes reduced or poor muscle tone. The neck stature of the child will be short. Another side effect of down syndrome is the presence of excess skin at the back of the neck. The child has a Flattened face and nose with small head, ears, and mouth. His/her eyes are slanting upward.

Trisomy accounts for 95% of all the cases of Down’s syndrome. In such cases, the chance of some parent producing a second affected child is very low. However, in about 5% of families with a Down child, the syndrome occurs in a much higher frequency over several generations. This is called Familial Down Syndrome.

This individual has only 45 chromosomes but has a nearly complete content of genetic information. During meiosis, one-fourth of the individual’s gametes will have two copies of chromosome 21; a normal chromosome and a second copy translocated to chromosome 14.

When such a gamete is fertilized by a standard haploid gamete, the resultant zygote has 46 chromosomes but three copies of chromosome 21. This individual exhibits Down’s syndrome. Other potential surviving offspring contain either the standard diploid genome a translocation or the balanced translocation like the parent.

Both cases result in normal individuals, but the surviving offspring of the latter have a 1 in 3 chance of exhibiting Down’s syndrome. Knowledge of translocations has allowed geneticists to resolve the seeming paradox of an inherited trisomic phenotype in an individual with an apparent diploid number of chromosomes.

2018-08-03
admin
Previous: The Chromosomal Inversion and Its Types
Next: The Pollination Process and Types of Pollination [Full Explained]