Urea is the principal disposal form of amino groups of amino acids, and about 90% of nitrogen containing compounds of urine. At first, the amino groups of amino acids are converted into glutamate by the process of transamination reaction.Then, glutamate can enter into oxidative deamination reaction, and provide ammonia. Finally, most of the toxic ammonia is converted to urea by the process of urea cycle, and excreted through the urine.

The first two reactions of cycle occur in mitochondria, whereas the remaining reactions occur in cytoplasm of cells.

(2) Formation of citrulline: The carbamoyl group of carbamoyl phosphate is transferred to ornithine, forming citrulline, catalyzed by ornithine transcarbamoylase. 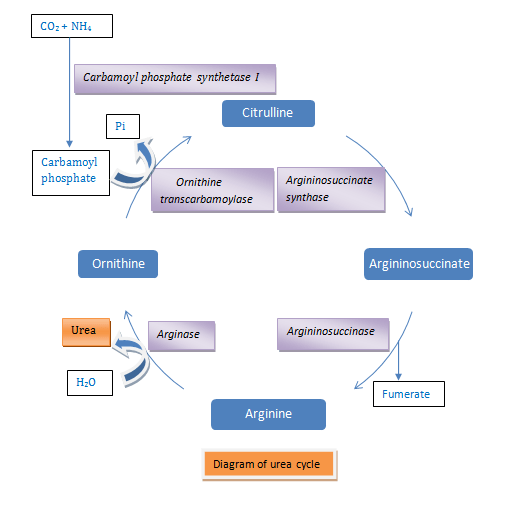 (6) Disposal of urea: From liver, urea is transported in blood to kidney, where it is filtered and excreted through the urine. A small portion of urea diffuses from blood into the intestine, and is converted to carbon dioxide (CO2) and ammonia (NH3) by bacterial urease. This NH3 is partly excreted in the feces, and is partly reabsorbed into blood.