Majority of them are fresh water. They are also found on moist soil. They form dark green mats. 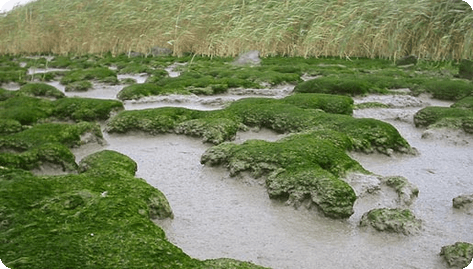 Vegetative structure:The thallus is filamentous. The filament is cylindrical, branched, tubular, erect coenocytic. The filament is attached to the substratum by hepteron. Hepteron is colourless branched rhizoid like structure. Filament increases in length by apical growth. Cross walls are absent.

Cell structure: The cell wall is thin. It consists of inner layer of cellulose and an outer layer of pectic substances. The filaments are coenocytic. Septa is absent between the cells. Septum is present only at the base of reproductive structure. The cell has peripheral layer of cytoplasm.
Cytoplasm surrounds a large central vacuole. Vacuole is filled with cell sap. Many small nuclei are embedded in the cytoplasm. Cytoplasm also contains small discoid chloroplast. Chloroplasts are small, oval, circular or elliptical. The pigments are chlorophyll a, chlorophyll e, beta-carotene and xanthophylls. Nanthophylls are dominant pigment. Its gives the thallus yellow-green colour. Pyrenoids are absent. The reserve food material is oil drops. 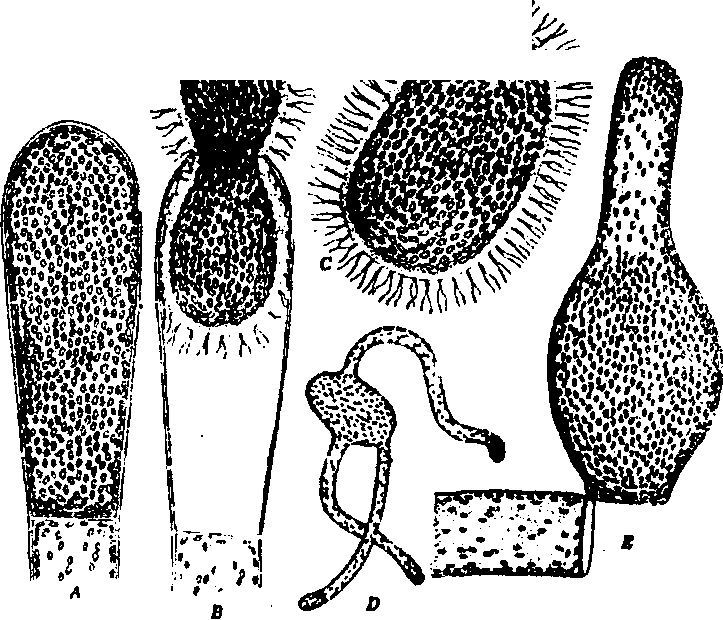 Vegetative reproduction: Vegetative reproduction takes place by fragmentation. The filaments are broken accidentally into fragments. Each fragment develops into new plant.
Asexual reproduction: Asexual reproduction takes place by zoospore and aplanospore
zoospores: Zoospores are produced in sporangia. The tip of the filament enlarges. A septum separates the tip from the filament. The protoplast of sporangium contracts. It is changed into single multinucleate zoospore. Many flagella develop on the surface of zoospore. Two flagella are present opposite to each nucleus. The centre of zoospore is occupied by a vacuole. The zoospore comes out through a pore. It then settles on the surface and undergoes a period of rest. Then zoospore lost flagella. Now zoospore secretes a thick wall around it. It germinates and form two or more germ tubes. These tubes grow to form new filaments. One of the tube acts as hepteron.
Aplanospore: Aplanospores are produced in terrestrial forms. They are produced within the aplanosporangia present at the tip of short lateral branches. The protoplast of sporangium is changed into .aplanospore. Aplanospore is non-motile. The sporangial wall ruptires and releases the aplanospore. Aplanospore develops new plants by two ways:
Direct development: In this case, aplanospore germinate to form new plant directly.
Indirect development: It occurs during extreme desiccating 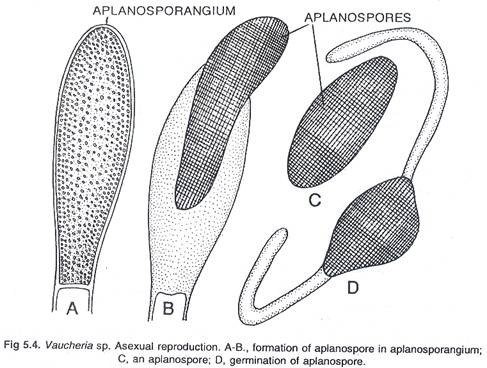 conditions or in low temperature. Sometimes, thin wall divides the contents of aplanospore in to many parts. Each part develops cysts or hypnospores. This stage of Vaucheria is called Gongrosira stage as it resembles the alga Gongrosira. The cyst ruptures in favourable conditions and protoplast comes out by amoeboid movement. This protoplast become spherical and secretes new wall. It germinates to form new filament.

Oogonium: Oogonia are produced near antheridia on the same filament. The devclopment of oogonium starts after the development of antheridium.
Ooganium is produced from short lateral branch. These branches are present near the antheridium. A bulge is produce in the filament. A large mass of cytoplasm with many nuclei and chloroplast move into it. A septum cut off it from main branch. The oogonium swells and becomes globose. The multinucleate protoplast of oogonium is changed into single egg or oosphere. Only one nucleus is left in it.
All other nuclei are degenerated. A pore is produced in the wall of oogonium.

Fertilization: Many antherozoids enter into oogonium through its pore. But only one fuses with the oosphere. The size of male nucleus increases before fusion. The zygote secretes thick wall and it becomes oospore.